Thursday, June 26, - Sunday, June 29, 2014. (click on pictures for full size).
Another Fossil Summer Motorcycle Trip has begun!  The meeting place was the IKEA parking lot in Bloomington after work.  Goal is to zoom around the hills of SW Wisc for a four day weekend. We are six Fossils strong: Keith, Lloyd, Greg, Steve, Jim and myself (Wayne).  The forecast was threatening rain but we are good right now. 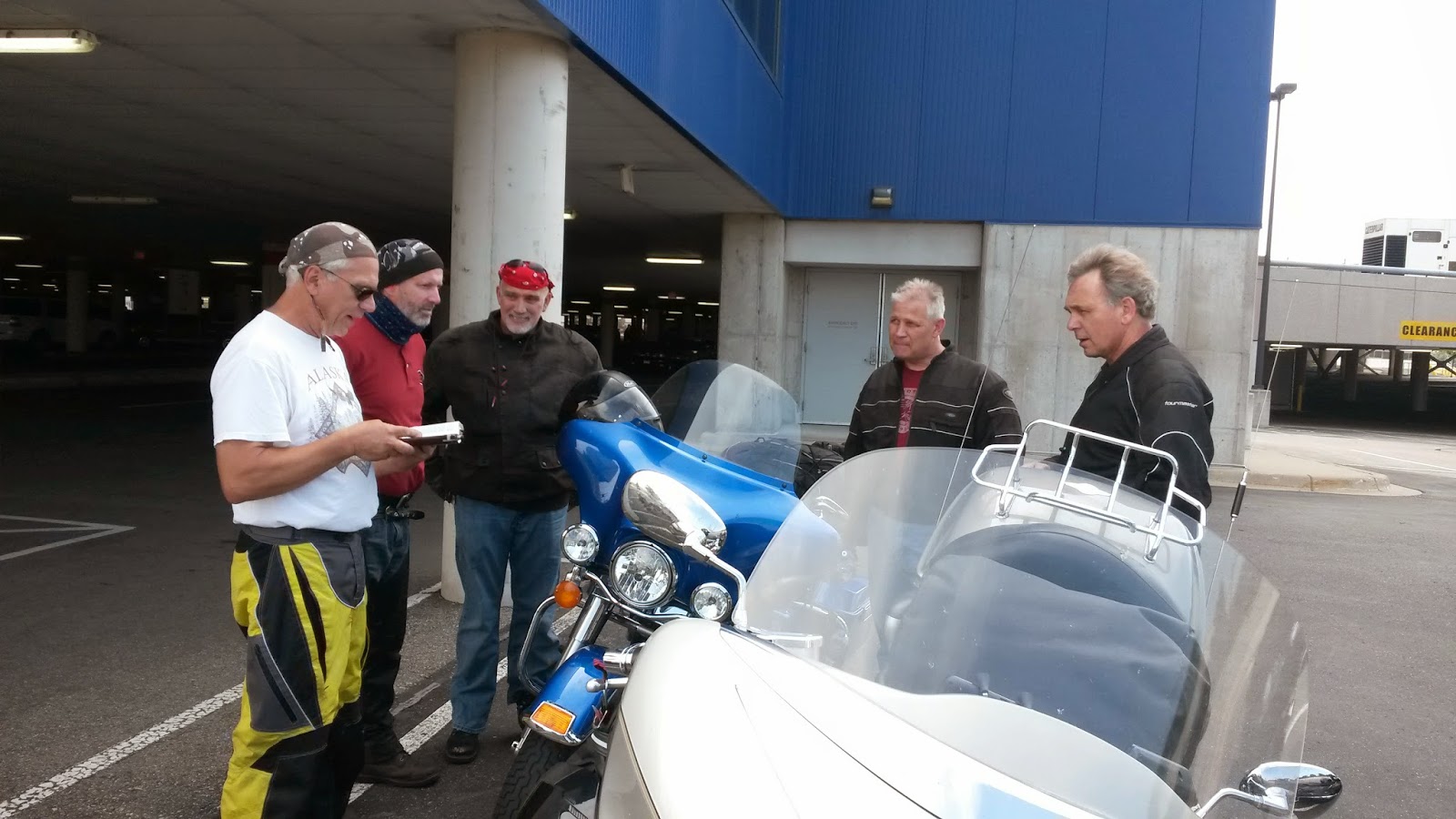 After a quick scripture reading and prayer we were on our way.  Our immediate goal was RedWing, MN where our senior Fossil, Gordy, was busy preparing brats and baked beans for supper.  After a bit of confusion on which exit we would take off of US52 which separated us, we got there and had a great time with Gordy and his lovely wife, Mrs. Gordy, on their back yard patio. 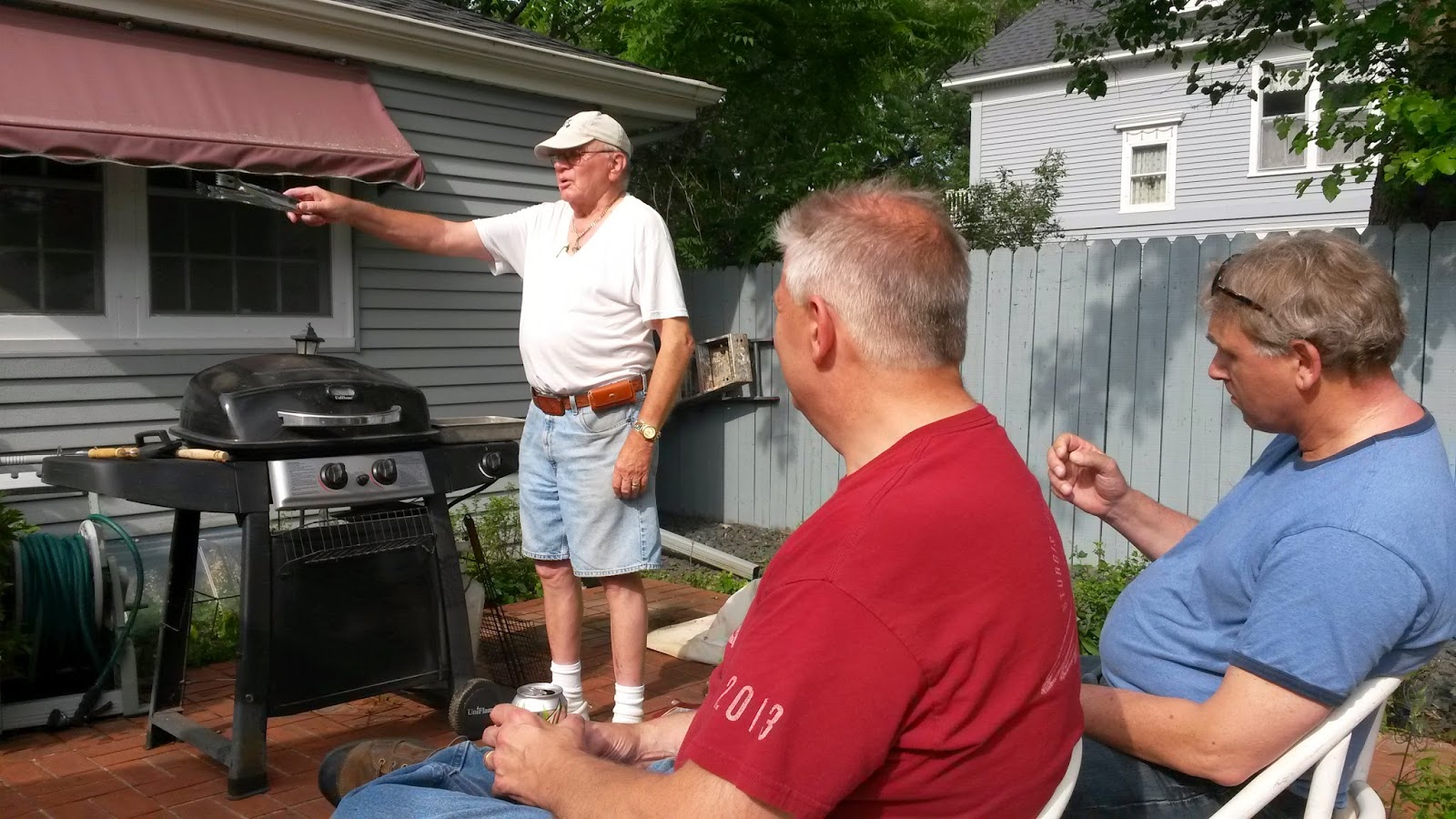 As much fun as we were having, we still needed to pull away and get to our first night destination.  Also, the weather radar was threatening rain and the sun was threatening to set.
Steve and I wanted to camp so we headed to Perrot State Park near Trempealeau, WI.  We crossed the river immediately and enjoyed the famous winding road of State Hwy 35.  It was a beautiful ride as we watched the setting sun cascade through the advancing clouds and rain showers.  The showers were light and intermediate so we were able to set up camp relatively dry. 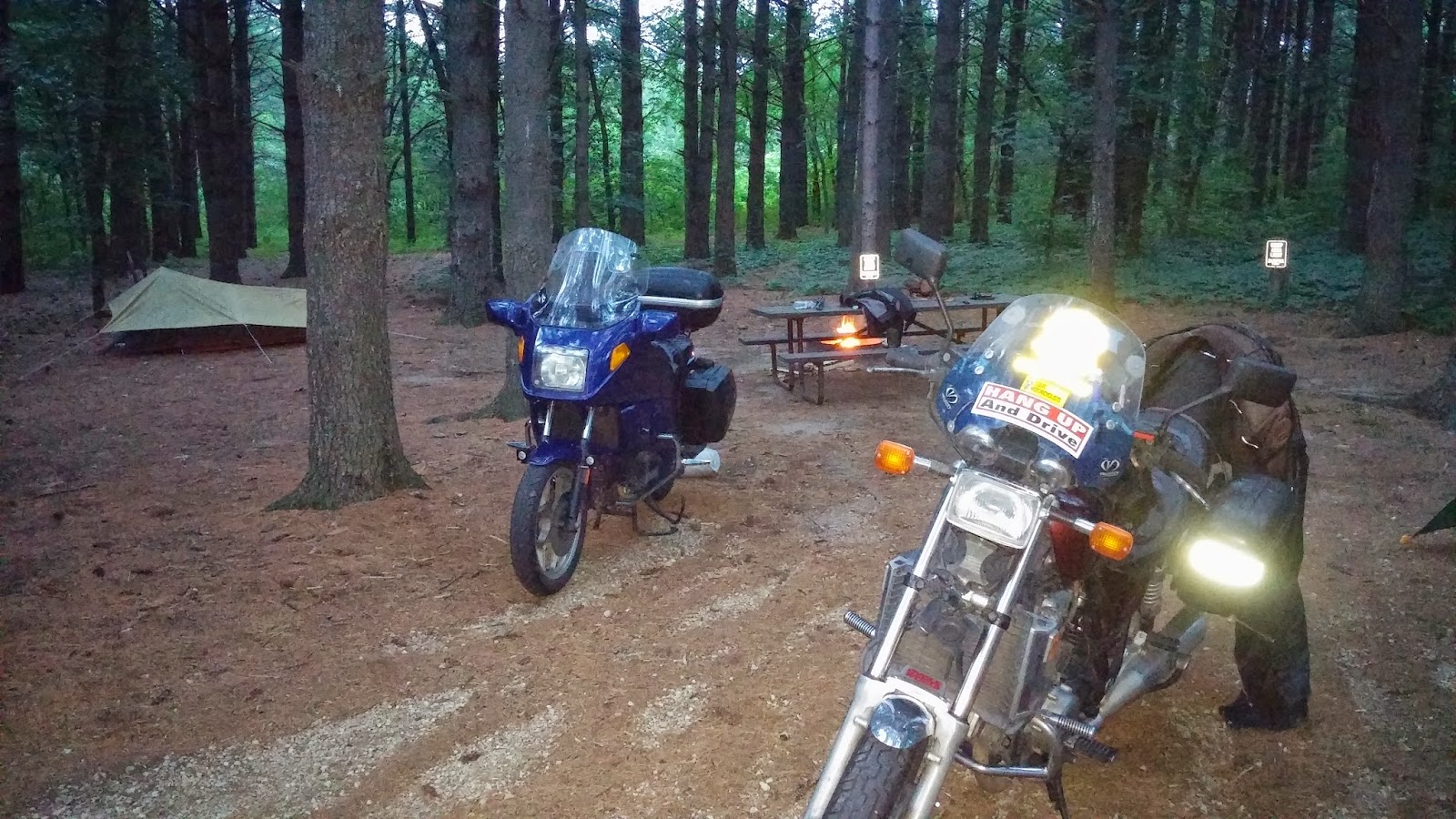 The rest of the guys stayed on the MN side as they had reservations in a motel in Winona.  Keith stayed in Red Wing at Gordy's house (Gordy is his dad).  The two of them would find us for breakfast in Trempealeau in the morning. 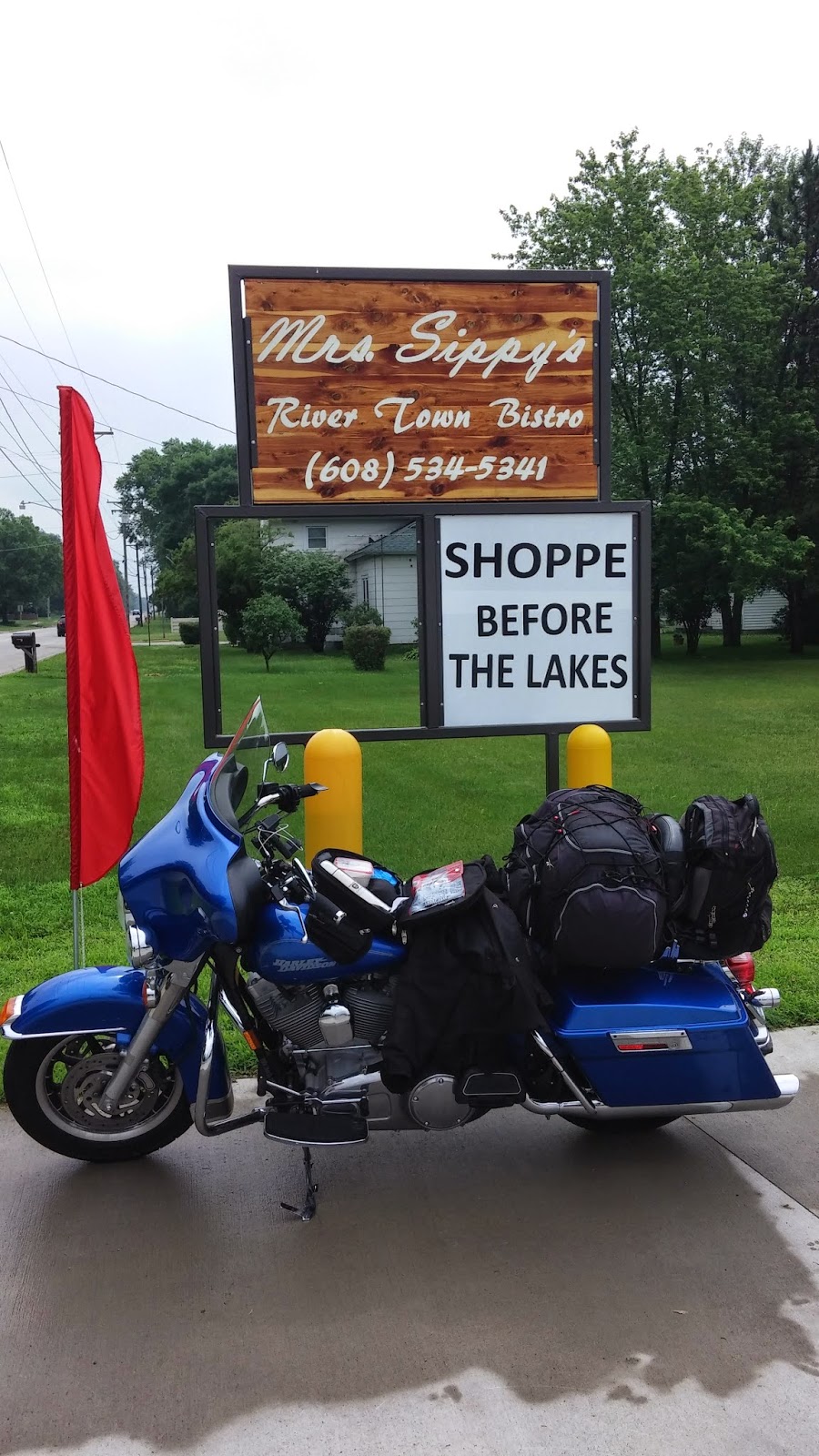 It was raining as we found our way to the breakfast joint "Mrs. Sippys" (on the Mississippi).  Good to settle in with a warm coffee and omelets, dry off and hear our introductory session from Pastor Keith on our Christian study this weekend.

After breakfast we bid adieu to Gordy who had enough of riding in the rain and headed back home.  Then we headed south and east.  We needed to get south of Interstate 90 to get out of the crowds and into the good alphabet roads of SW Wisc.  I thought I had found a way to get around the LaCrosse/Onalaska "metropolitan" area to meet this goal, but I must have turned right when I should have kept on straight because we were soon into downtown Onalaska fighing traffic.  I pulled into a Harley dealer to try to figure out where we were.  This was fortuitous since Keith had borrowed a friends Harley and, as Harleys are famous for doing, something had rattled off and needed to be replaced. 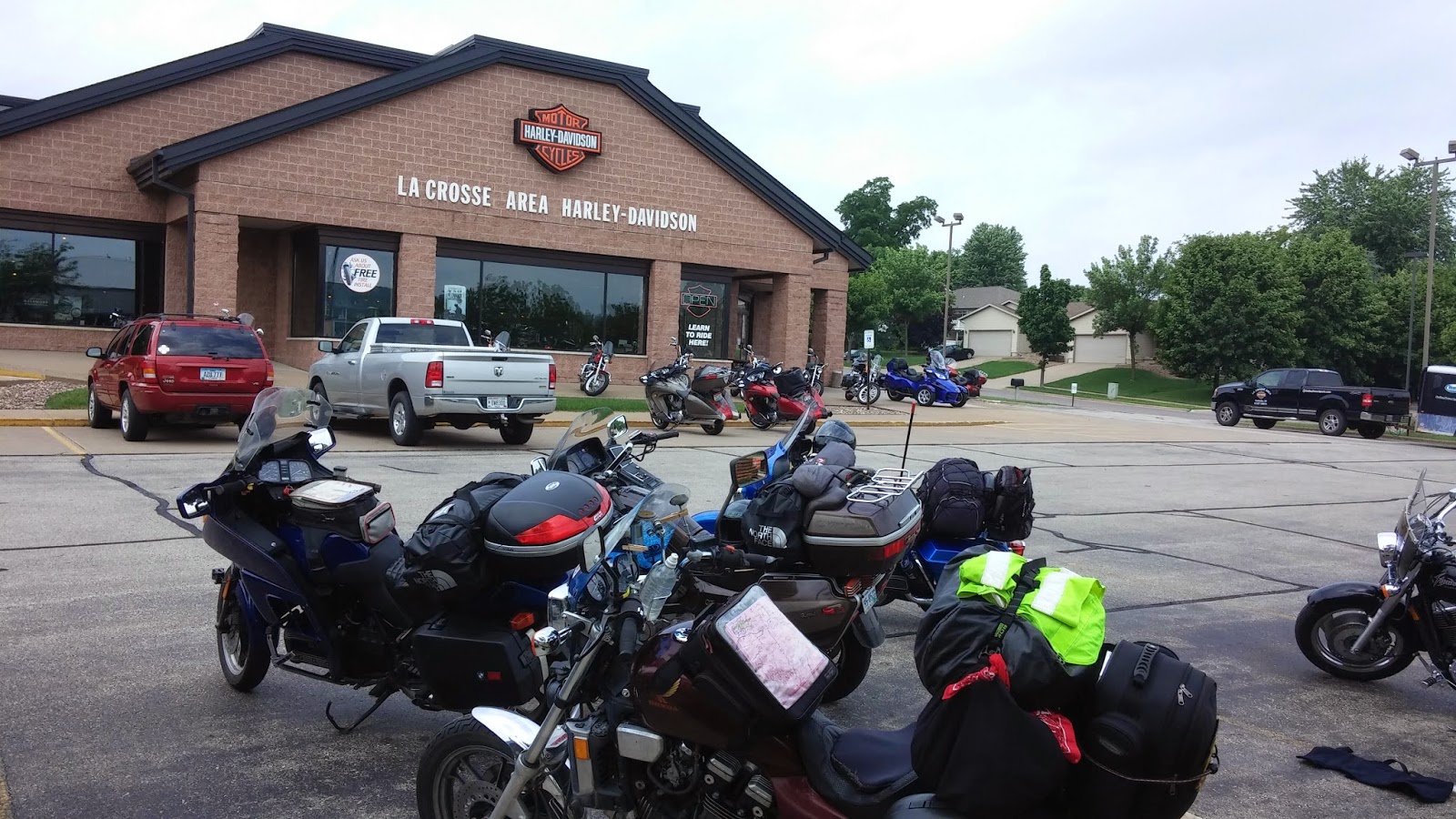 While he was inside buying the needed farkle we figured out how to get out of town and finally were into some fun roads.  We were having a great time just taking whatever alphabet road looked interesting with the eventual goal of getting to Wild Cat Mountain State Park where there was a stellar look-out.  The main road to the State Park was under construction which was also fortuitous since that forced us to find a neat little county park to rest and plan our afternoon. 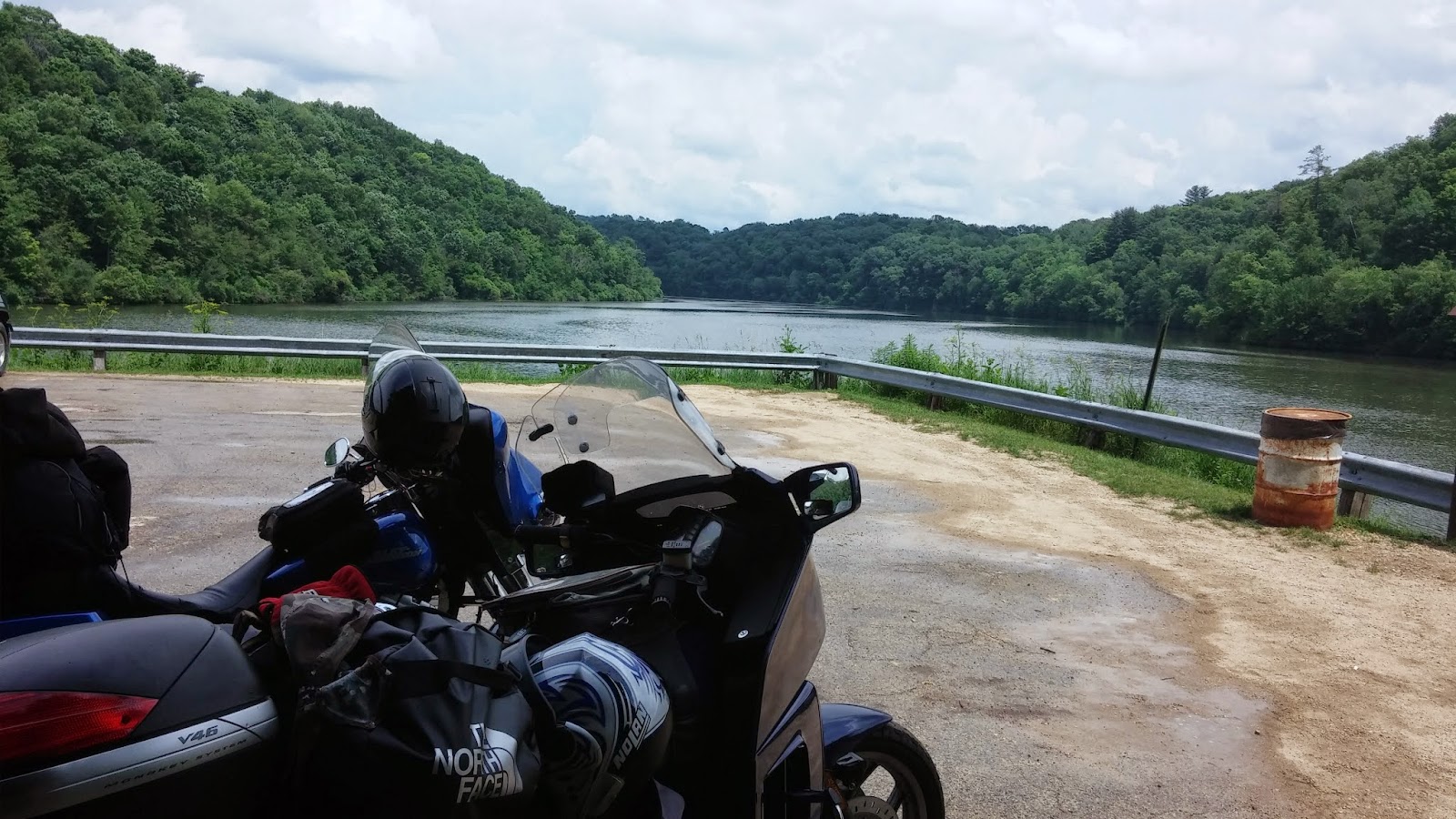 Then some more great roads and we found our way to Wild Cat Mountain; 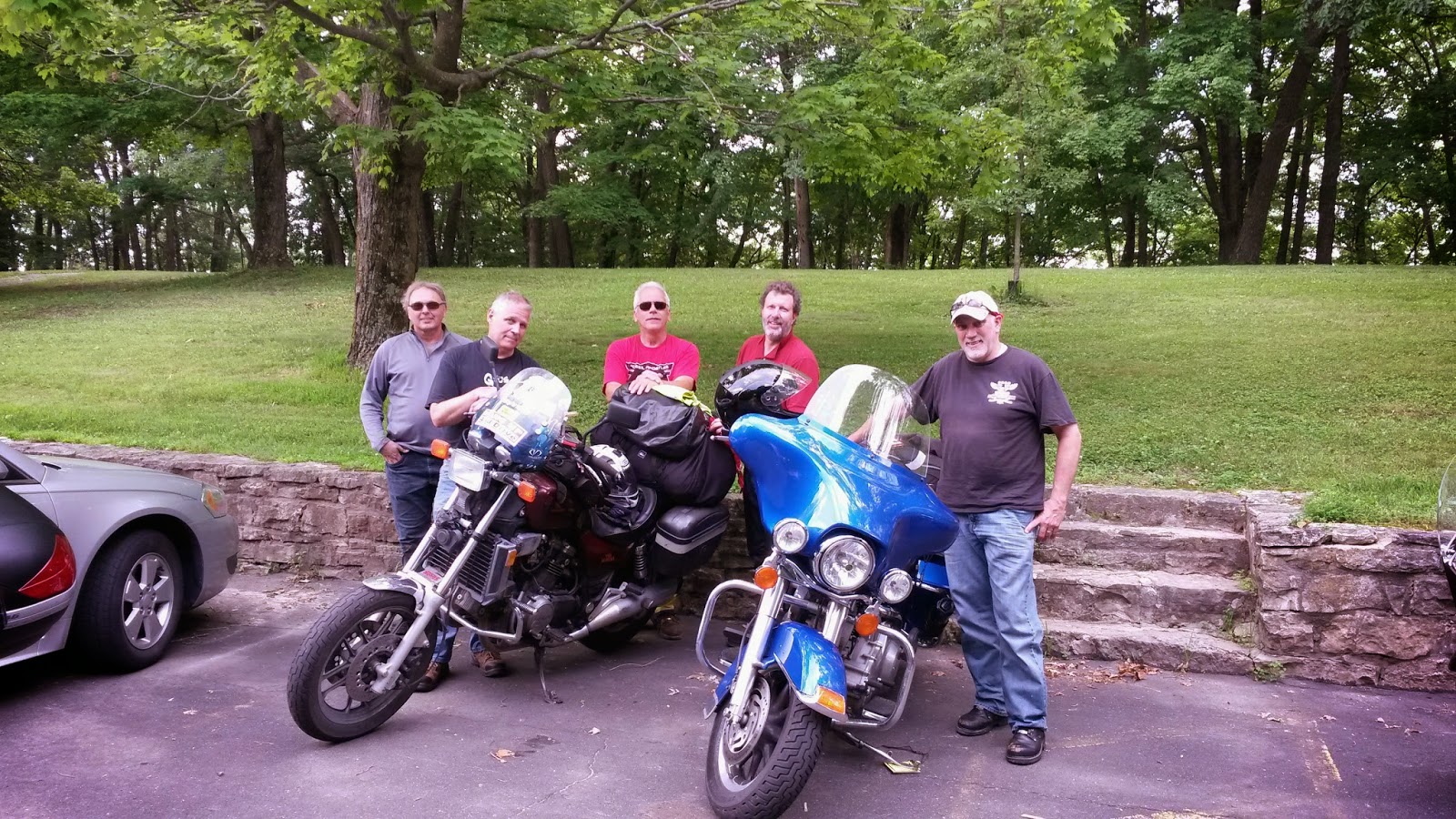 It was now mid afternoon and time to figure out where we would sleep tonight.  After looking over the maps we decide to head further south and east to Richland Center.  There, after a much-needed DQ stop, us two campers found a private campground east of town to pitch our tents and the other four went together on a suite in a local hotel.  This would be home base for two nights.  Supper that night was at a steak house called "Russels".  The bible study continued in the hotel suite. 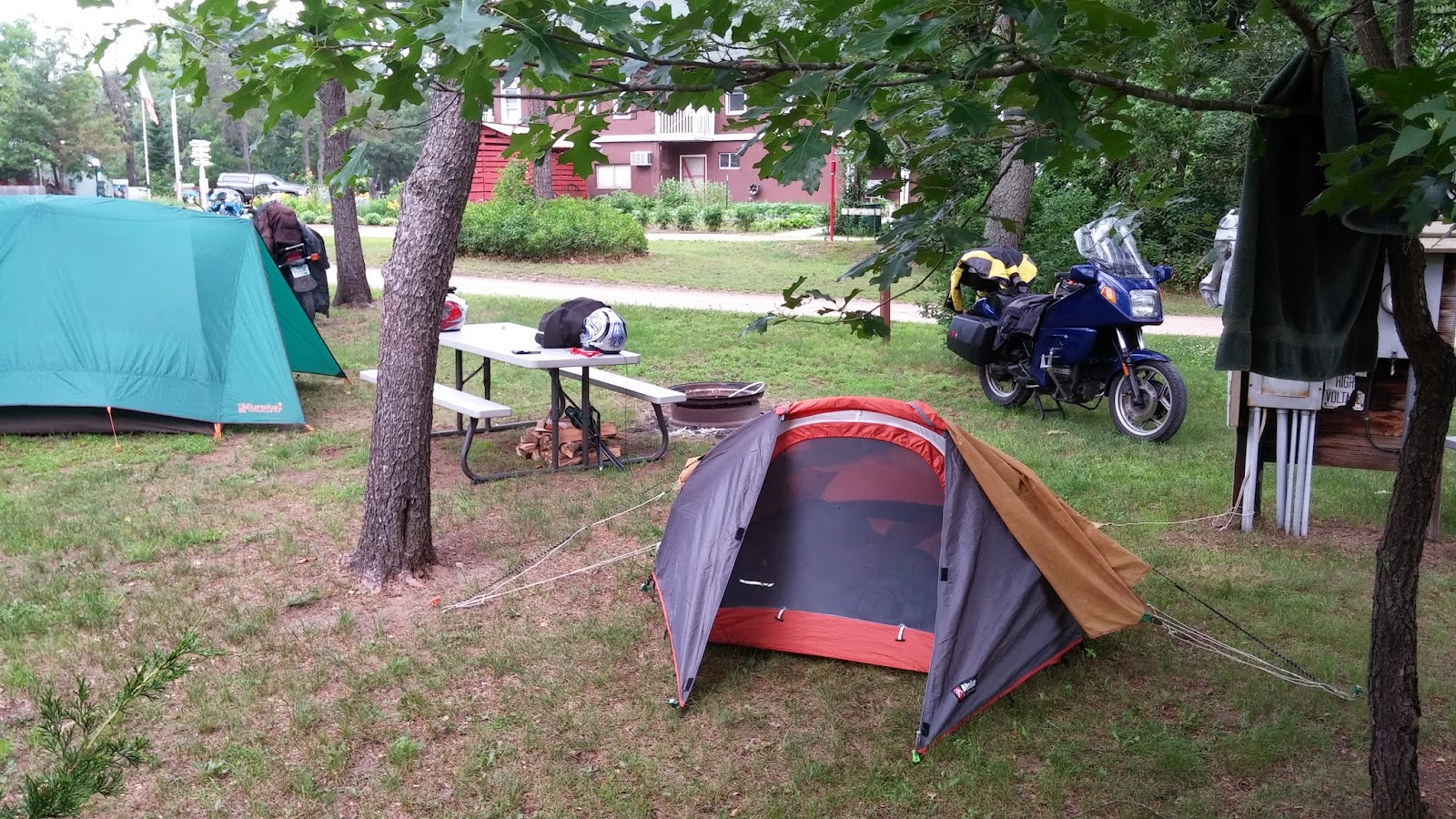 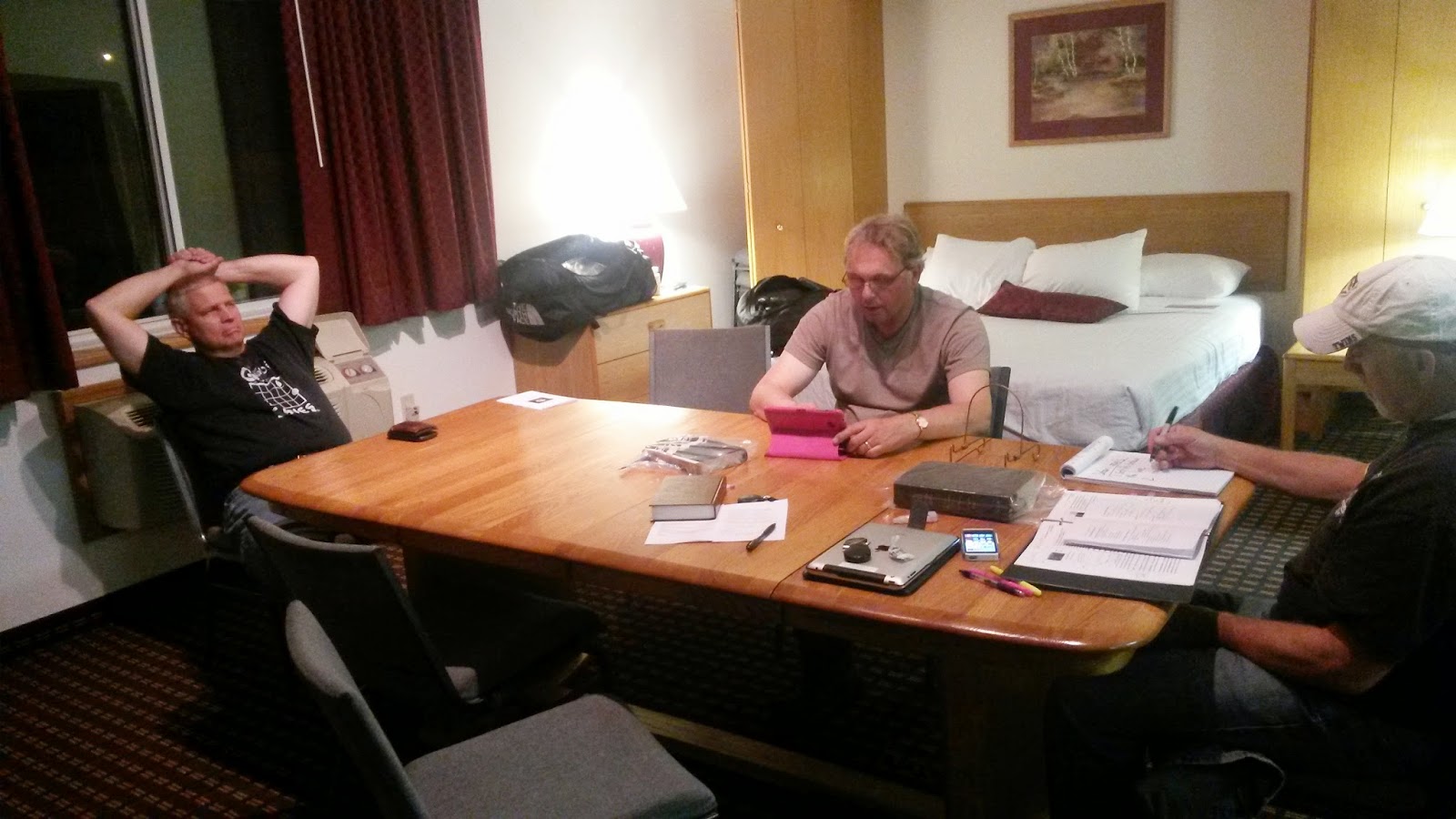 Breakfast meeting place this morning was down the highway a bit in a little town called Spring Green.   A couple of places looked interesting for destinations today.  One was Frank Lloyd Wright's estate "Taliesin" and the other was "The House on the Rock".  And of course, all the spectacular curving roads.  I was interested in a tour of the Taliesin until I found out a ticket was $50.  So, we decided to head to The House.  Except for Steve.  Steve came here to ride so he was going to ride the twisties while we looked at the stuff.  Can't blame him for that. 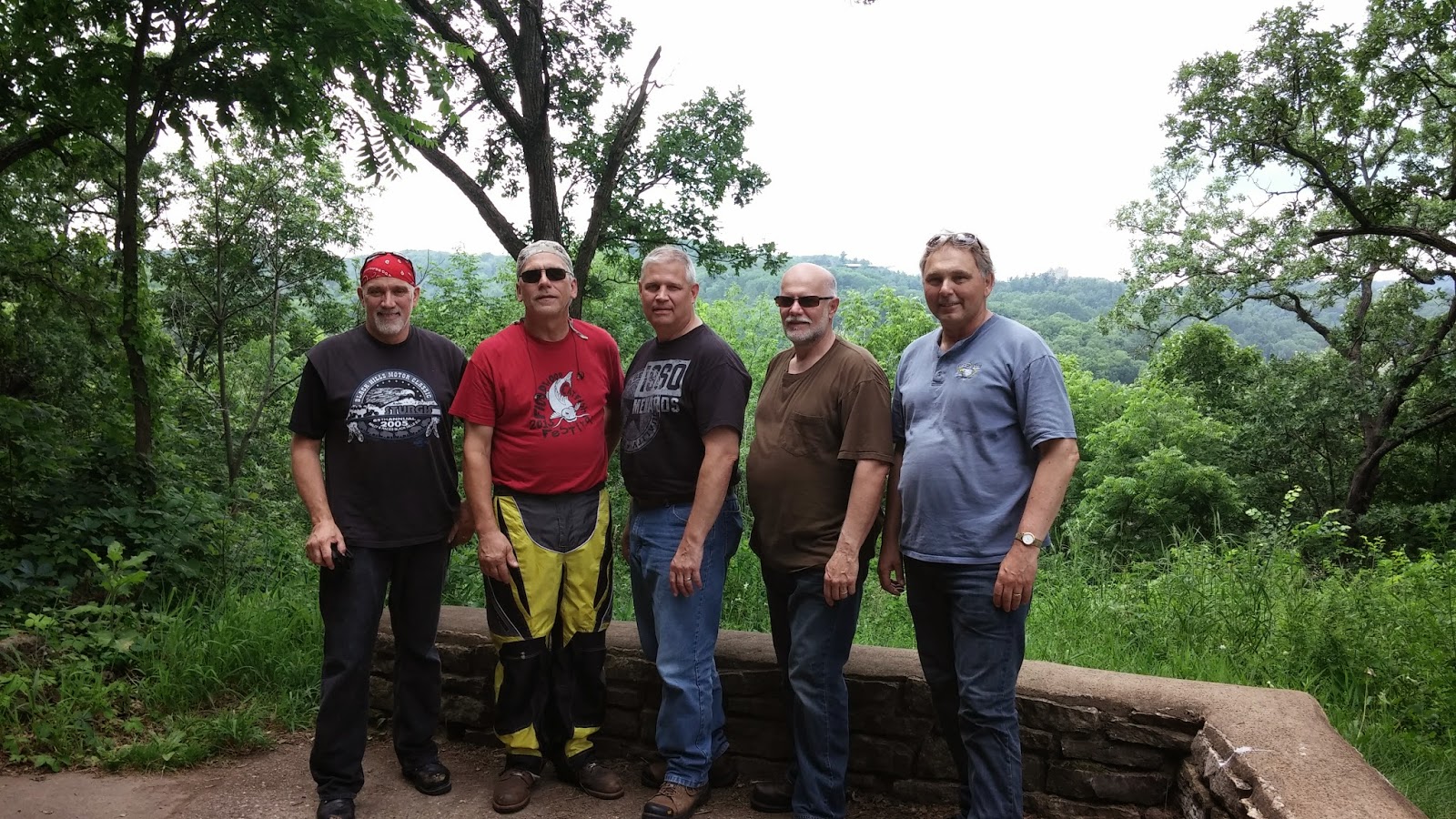 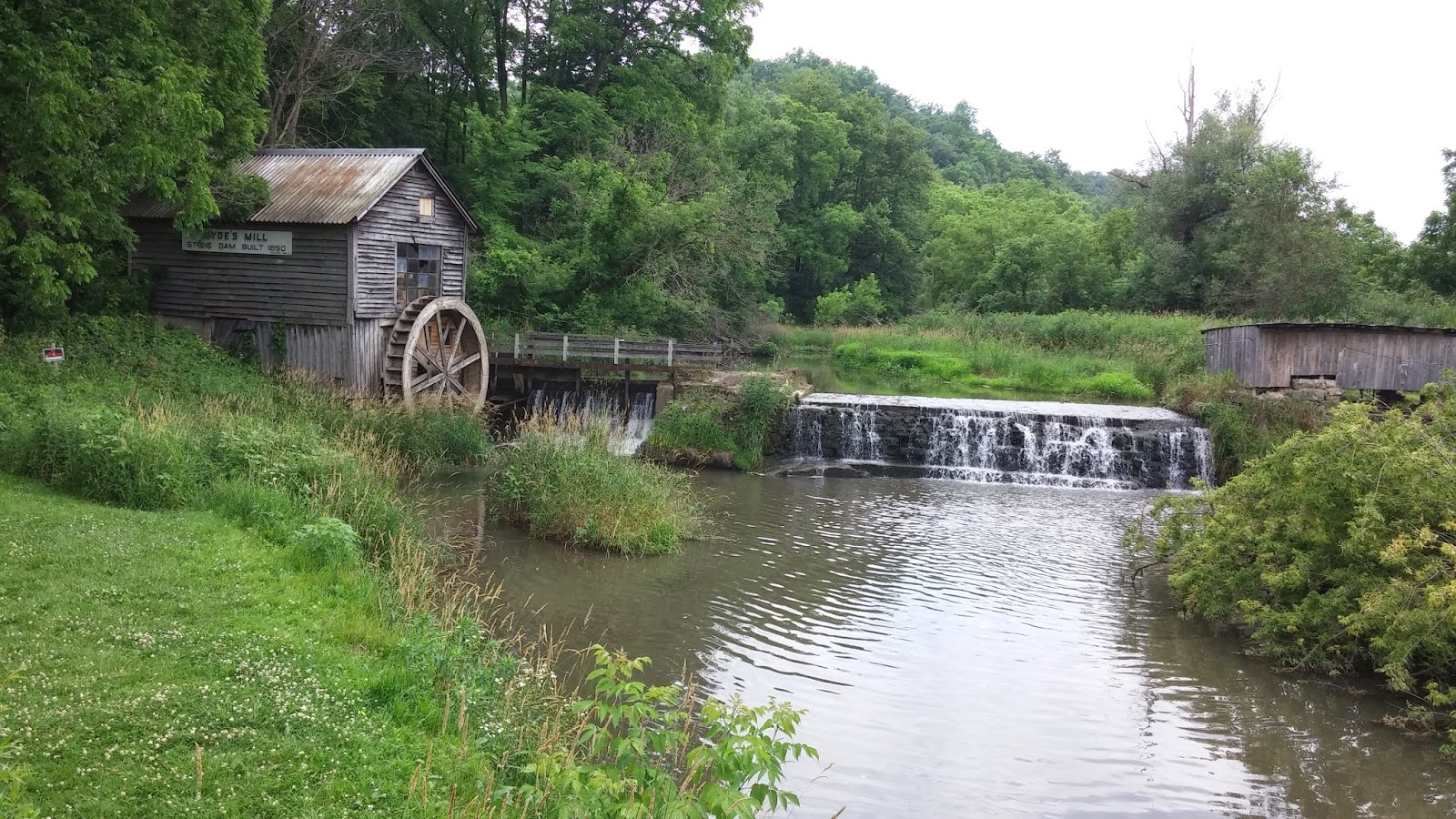 .That afternoon, after the tour, we started hitting the alphabet roads again.  It was a beautiful day and outstanding roads.  We found our way to a little town called Mount Horeb just in time for a snack.  I remember saying to Keith; "I need to find some ice cream with some pie under it".  He was obliging and found us a pie shop right downtown.  Only problem was, it was closed.... kind of.  We were staring into the front door and wondering why it was locked when the waitress came to the door and said  "What's up?".  "We'd like some pie, please"  "Well we're closed".  The short of the story is that she took pity on us and opened the joint just for us.  We had a great time getting to know her and having some great pie.  Turned out she has had some troubles recently and we were able to share our faith in Christ with her and promised to pray for her.  Please pray even now as you look at her picture: 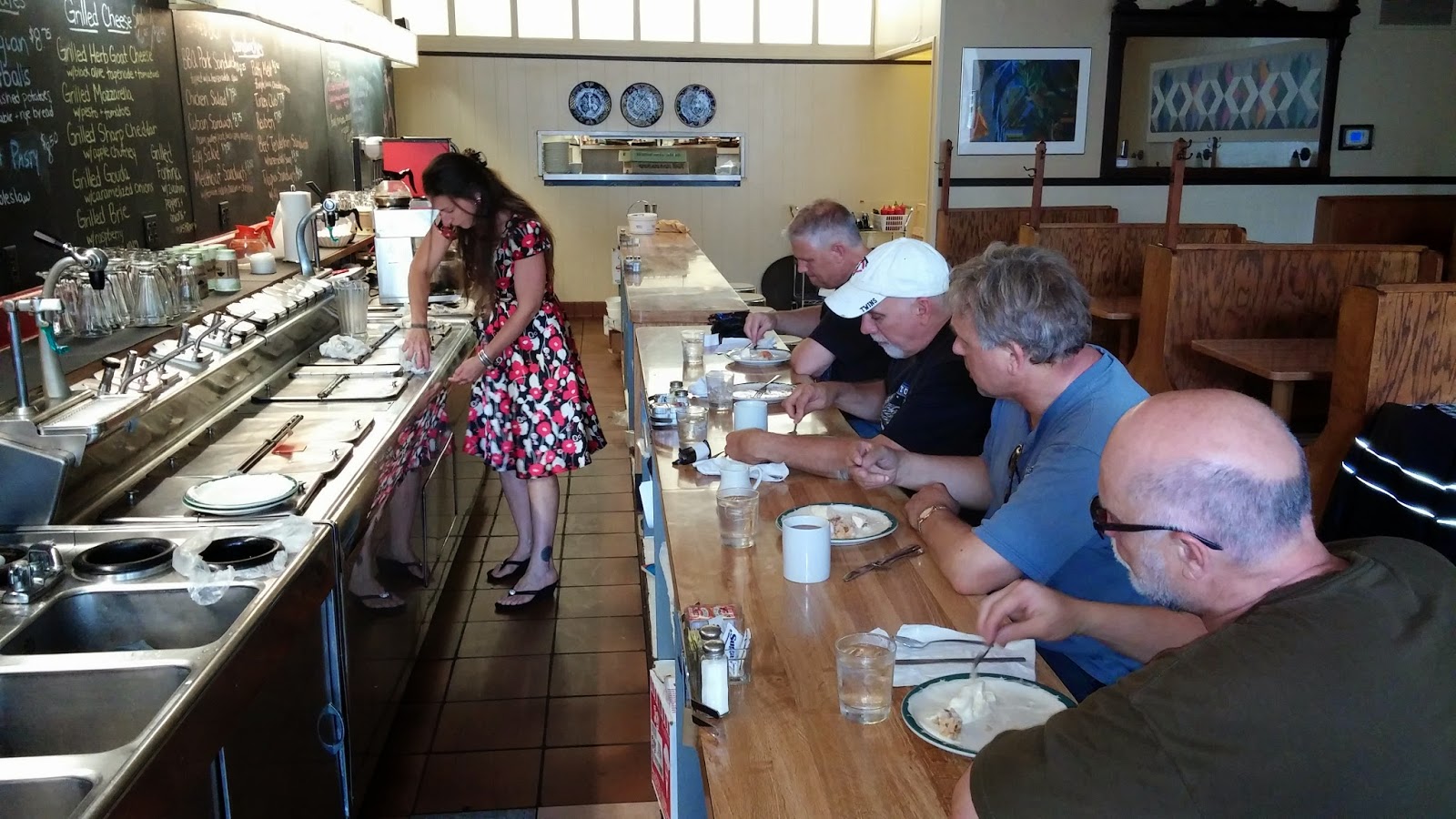 After our pie, it was time to start heading back to Home Base.  Supper was going to be brats on the fire at our campground.  Bible study was around the picnic table.  A great day. 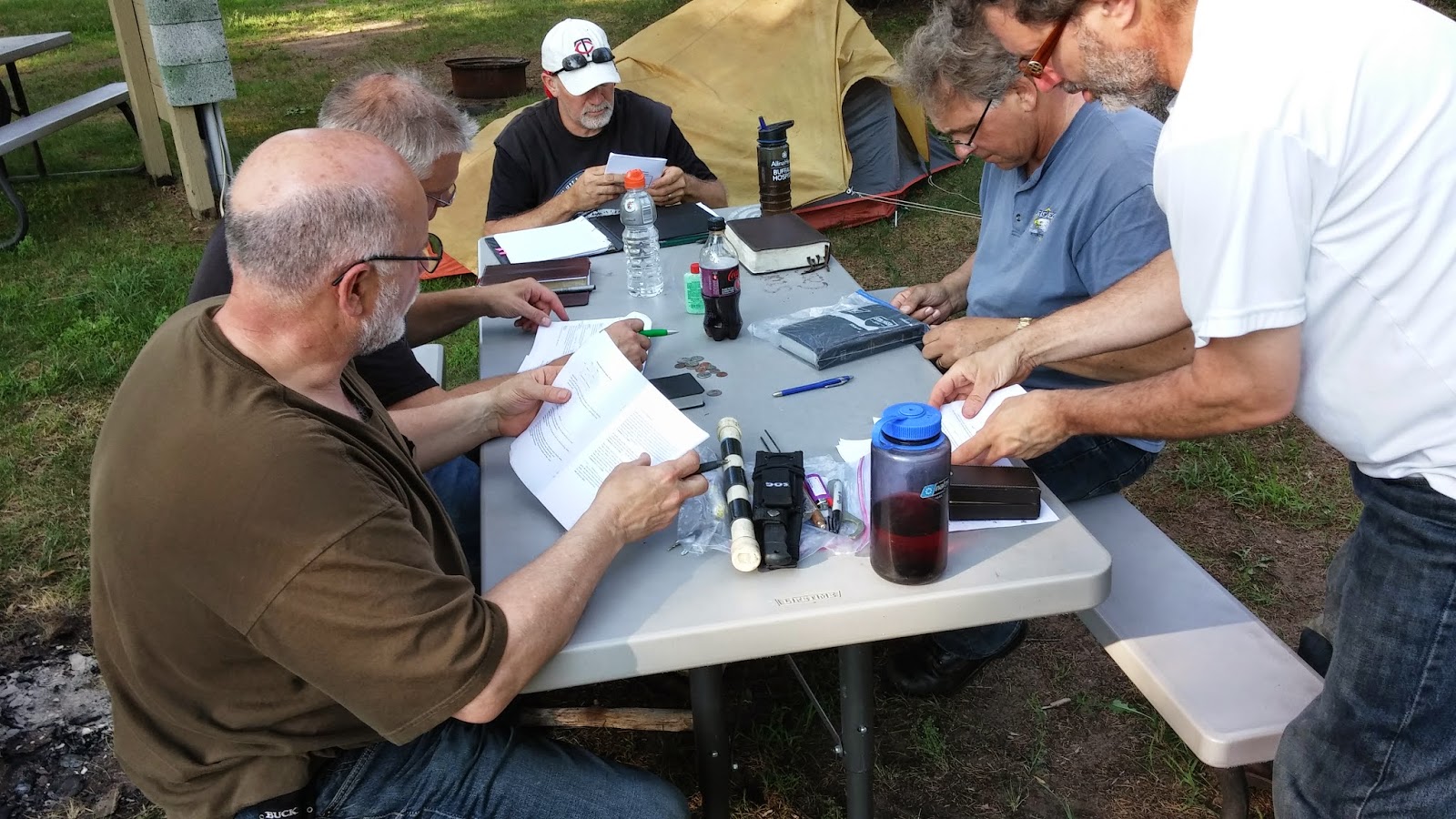 Sunday means it's time to head home already.  We found some breakfast and Steve was our guide.  He did a much better job than me in getting us past the populated areas around I90 and found some great twisty roads in the process.  We did not take the route in a leisurely fashion today.  Lunch was at a great BBQ place in Nelson called J&J.  Man that was good food!


So, this was the story of our Fossil Apostles Motorcycle Gang Summer Trip, 2014.  It was a great time, of course.  It is always good to re-acquaint with the Apostles, hit the road on two wheels and have great fellowship in the process.  And southwest Wisconsin never disappoints in scenery and great roads.
Thanks guys, it was a pleasure.
Fossil Wayne.
Posted by Fossil Apostles Motorcycle Gang at 6:07 PM