Summer Trip. Day 5 Naturita to Black Canyon of the Gunnison

Wednesday, July 15, 2015
Had breakfast in the same restaurant as our really bad supper and they make a much better breakfast and the service was fine!  The day is starting out good.  We loaded up and headed south on Colorado state Hwy 145.  A beautiful, twisty road through the San Juan National Forest.  After our morning ride the traffic got heavy but that let up after we got past the big tourist destination of the Teluride ski area.  Then it was a great ride again.  Stopped for pictures at Lizard Head pass.  Named for a huge rock out cropping that looks like a monstrous lizard. 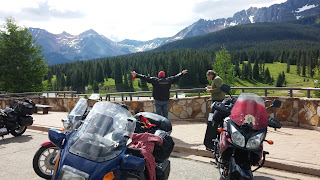 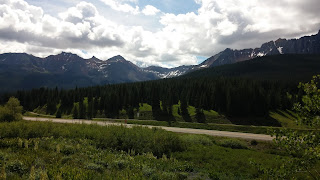 Then it was a nice ride south down the mountain to the little town of Dolores, then we headed east to Durango where we found lunch in a DQ and prepared for the great road known as "The Million Dollar Highway" (US 550) north which I fondly remember from my last trip to Colorado in 2001.  This beautiful road was still as beautiful as I remembered but unfortunately it was stopped up with traffic from road construction.  They were stopping traffic for one way travel which put us into a pack of slow moving vehicles.  But we stopped at the delightful tourist town of Silverton and did some shopping.  I bought an anniversary present for my bride of 38 years which I was going to miss because of this trip. 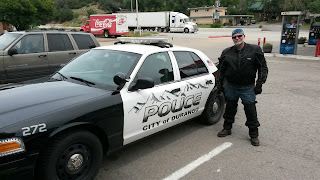 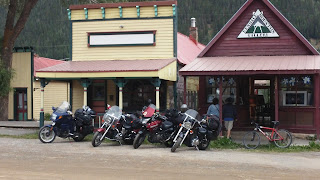 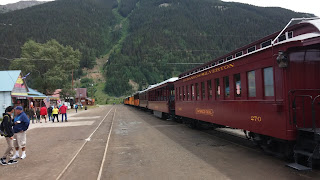 After Silverton we got back onto the great twisties of the Million Dollar Highway (still road construction) to Ouray then further north through the high plateaus to Montrose where we bought supper and breakfast for the campground.  Headed east on US 50 and found a campground along the Black Canyon of the Gunnison. 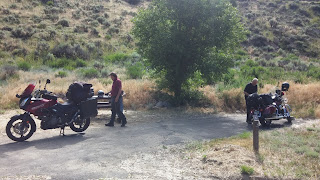 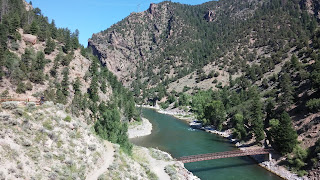 .  Around the camp fire I got a hot ash into my eye which caused not a little concern and pain.  But Dr Jim had just the treatment in some high power eye drops that was just the ticket.  That night we were able to continue the bible study from I Tim 6 on pursuing righteousness.  It was a long day but we saw some great scenery and hit some great roads