Sunday July 12.  Woke up nice and early and unloaded the bikes off the trailer.  Then breakfast at the campground: sausage and pancakes cooked by the mother of the KOA owner, Scott.  Scott lead me to a place to park the trailer and van for the week.  Then we loaded the bikes with our stuff, read a scripture, prayed and hit the road.

Goal was to take Interstate 70 through Denver and Colorado to Vega State Park in western Colorado where we'd start our adventure of taking twisty roads back forth south and east until we'd get back to Denver by the end of the week.  Normally we try to avoid interstates when we are riding but we wanted to get west and then work our way back so it was a necessary "evil".  And if you are forced to ride an interstate, I70 through Colorado is about as good as they get.  Mountain passes and the Eisenhower tunnel are the highlights.

It was nice that is was a Sunday morning in that the traffic was not very bad getting through Denver. The weather was warm to hot but the scenery soon got nice.  We could see the mountains west of the city and it wasn't too long until we were working our way through them.  Nice, very nice.

Between Eagle and Glenwood Springs there was a total traffic stop due to construction.  It soon became very evident that the stop would be quite a while so everyone shut off their engines and started milling around taking in the scenery.  It was an annoyance to have to stop but the ambiance was amazing.  High mountain cliffs on each side, a river and railroad track down below: 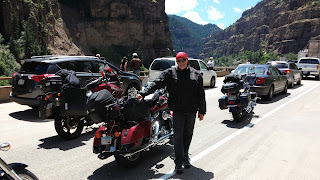 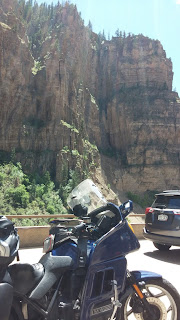 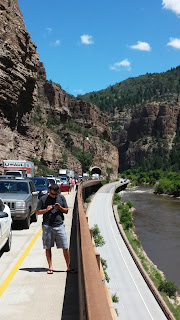 Lunch was in GlenWood Springs which was very busy with many tourists.  We then started planning our afternoon when we'd get off the super slab.  As mentioned, our goal was Vega State Park in the Grand Mesa mountains.  We had noticed that there are two ways to get to Vega, one short cut via gravel and one longer route via paved two lane.  We stopped at a gas station in Silt Colorado and asked a young, bearded local man on the condition of the gravel road.  He said it wasn't too bad but he usually go there in a pick-up.  We decided to split up, two via the gravel and two via the pavement.  Steve has a new-to-him dual purpose Suzuki V-Strom which he was very interested to try on some dirt.  I (Wayne) decided to take it with him.  That is what we did, but we got lost a few times.  I mostly just got out of his way and let Steve have his fun.  The roads were pretty rough to my touring bike but his ran up the mountain fast, no problems. 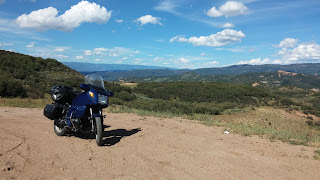 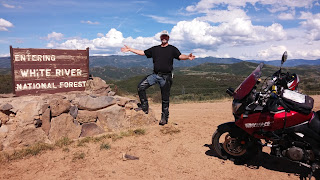 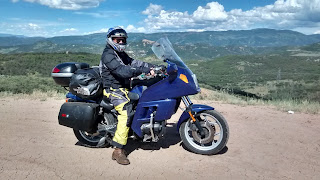 After about 20 miles we got to the summit and hit pavement back into the State Park.  The road was nice and twisty but I had a good scare with a deer jumping in front of me from behind a bush.  Yikes!
Jim and Keith caught up with us and we found a camp site.  Set up, make supper and had a bible study around the camp fire:  I Tim 6:11-15:  God's man is to constantly flee evil and constantly pursue righteousness. 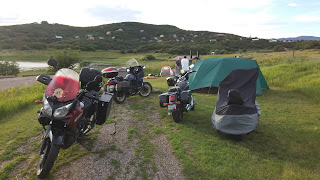 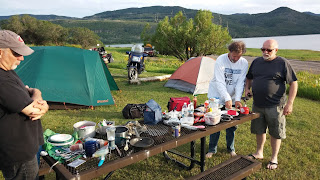 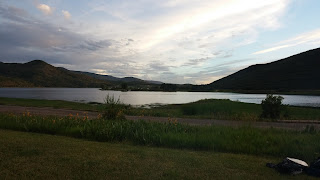 It was a long day, but very productive and we were in the mountains!