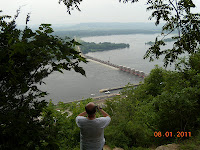 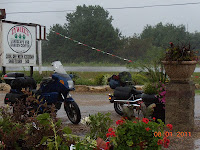 I slept well in my tent, Jim, not so much because of the heat, humidity and hard ground. This was my third night in the tent so I was used to it and tired enough to sleep anywhere.

Time to head home. Took State Hwys 31 north to 71 west. We tried to eat breakfast in Norwalk but even though the "Main Street Cafe" sign read 'OPEN', it was dark and locked up tight. Headed to Sparta, WI and after searching a while found a greasy spoon serving breakfast. Omelets were the choice this morning.

Hwy 71 showed a detour at Sparta so we searched our map and Jim found a county road heading north and west called "DE". This was nice and twisty but a bit run down and short of highway marker signs. I remember coming over one steep hill which caused the road to disappear at the peak and then turned tight left without prior notice. Wheee!

Some more county roads got us up to State 54 heading west towards Winona, MN. This road had a lot of traffic so we dumped it for county P up to Fountain City along the Mississippi on the famous biker's road, State 35. 'P' started out wide and new but soon changed to old asphalt with a lot of rubble. Still beat the traffic all to pieces, though.

Gas in Fountain City, WI then north to county E out of Alma which brought us up to a cool overlook over the town and the Mississippi River.

Now it was time to get serious about heading home so it was State Hwy 35 north to Prescott, WI then back across the river to MN and US Hwy 10 to Minneapolis.

Up to now the weather had always been hot and sunny but all of a sudden it started to change. We got our first inkling that something was up when the sirens started sounding as we traveled through Diamond Bluff, WI. In Prescott we pulled into a gas station to see what was up and a guy told us that there were thunder storms heading our way through the Twin Cities. We should have put our rain gear on but hoped we could skirt south of the storms and miss them... not gonna happen! Just as soon as we got across the river the skies opened up with heavy rain, high winds and lightning. We pulled into a nursery, grabbed our rain gear and headed for a convenient roofed gazebo they had there. The clerk in the store showed us the weather radar on her smart phone and we decided to wait it out for a while.

About an hour later the rain let up a bit and the winds and lightning died down so we headed on home. It was wet, but OK in our gear. I was home and drying off by 3:00 PM.

In conclusion, we had a great time. We found some great twisty roads, made some new friends, had a great time in Decorah, and had some wonderful fellowship. Thanks be to God!
Posted by Fossil Apostles Motorcycle Gang at 9:05 AM 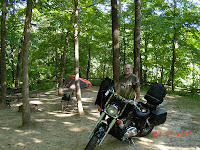 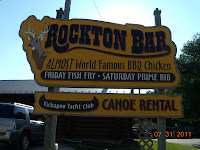 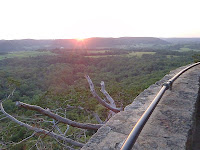 Another hot and humid day, in the mid 90s. But it was OK as long as we kept rolling.

Attended church service at Decorah Covenant where John's sister is the music leader and he was the guest percussionist. Then lunch at Culvers before heading out of town. John and Rick needed to get home quickly so headed straight north on the main drag. That left four of us, Greg, Bill, Jim and Wayne, to take the scenic route home through Wisconsin.

State hwy 9 east to Lansing, IA where we stopped for ice cream at "Skinny Dippers" again. This time I had a banana split.... yum!

We then headed across the Mississippi to Wisc where we took some twisty alphabet roads for a while: C, B then state hwy 26 up to Viroqua. As mentioned, the plan was for all of us to head back home but I was having so much fun on these roads that I asked Jim if he would consider camping overnight and going home the next day. We both already had the day off of work so he quickly agreed.

So, we split from Greg and Bill since they had plans the next day. They were heading home via state hwy 35.

After setting up camp we headed back to Rockton WI and had a greasy burger at the Rockton Bar, home of the almost famous BBQ chicken. (I should have tried the chicken).

We got back to camp then walked out to the scenic overlook and waited for a beautiful sunset over the Kickapoo Valley. Walked back to campsite and started a fire and watched it burn before hitting the hay.
Posted by Fossil Apostles Motorcycle Gang at 8:50 AM 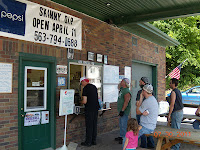 Beautiful day but a bit hot and humid. A lot of the nicest roads were high and offered great panaramic views of the countryside. They also had nice sweeping curves which we could take at highway speed and very little traffic.

We stopped at a road side picnic/boat landing for a break and an opportunity to figure our where we were and where we were going. Then headed to Lansing, IA and found an ice cream/bait shop called the "Skinny Dip". Had a good time eating ice cream and talking over the morning's ride. Lansing has a bridge across the Mississippi and thats where Keith was going to head across to Wisconsin and find his way home. We said our goodbyes and the rest of us headed on south to MacGregor on a nice county road. It was here that we decided to play "musical bikes". I traded with Greg. Then we stopped at another little town and I traded with Bill and Greg traded with Jim. At McGregor we got our own motorcycles back.

Next stop was the "Pikes Peak State Park". A nice park with a great overlook of the big river. Then we headed down to Guttenberg and stopped at a lock and dam where we watched a huge barge get a lift up the river. It was so big that it didn't all fit into the locks so had to seperate and go through in pieces.

Now it was time to start heading back to PorkChopVille (Decorah). Our main motivation was to get to the Nordic Fest before the smoked pork chop booth was closed. We found some more nice county roads with more great panoramic views of the hills, valleys and farms. And because these county roads run parrallel to main state and federal highways we mostly had the roads to ourselves. I was particullarly impressed with the architecture and use of building materials of the old farm houses, barns and churches. The builders really put some thought and quality workmanship into these structures. I would have like to have stopped and taken pictures of them all but we'd still be there taking pictures....

We stopped at a little city park in Clermont, IA. John was the first one to use the facilities there and came back and said that someone needed to take a picture of the men's room. That there was something very odd there. We thought that was an unusual statement and investigated. The men's room has two toilets, side by side with no divider. We had to wonder, why? and who would take advantage of these????

We made it back to Decorah, walked down town and had some great smoked pork chops on the street. Back to the house and a bible study on working "heartily as for the Lord". Then we headed back down town for the fireworks scheduled for 10PM. There was also a Nordic dance going on with some very talented dancers.
Posted by Fossil Apostles Motorcycle Gang at 8:00 PM 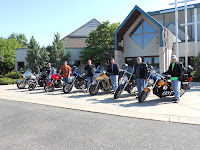 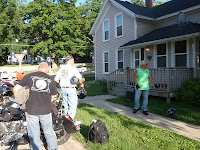 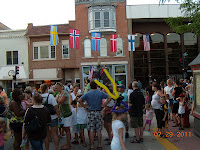 
Plan was for the NW gang to meet at MGCC at 9:30 am then travel south and pick up Wayne at the IKEA parking lot. Plan happened but a little delayed. No worries, we are on vacation. Lloyd, who was not able to make the trip came for the kickoff meeting. Scriptures were read, prayers prayed.

Those meeting at the church were John T, Rick S, Greg S, Keith R, Bill N, and Jim G. Plus me (Wayne) at the IKEA makes seven.

We then headed east and south to Red Wing via I494, US 52, 55 to Hastings. Then Ravena Road and associated roads down to Red Wing where we met up with Gordy and Nancy's for lunch. Gordy joined up for the afternoon ride until our ice cream stop in Lewiston after which he turned back for home.

Out of Red Wing roads were US 61 south to County 25 south at Minneiska to Lewiston then County 29 south to Peterson, MN 16 to Lanesboro, County 21 south to Canton, County 23 north to Cnty 10 east and MN 43 back south to Mabel. MN44 east to County 8 south to Iowa and Locust Road to Decorah. All the county roads were great but, by consensus, the road of the day by far was MN 16. It was twisty, brand new and smooth with no other traffic. What a blessing!

Lanesboro meant a stop at a bicycle shop were Jim bought a pair of fingerless gloves because of the heat. You'd think that gloves without fingers would be less money than gloves with fingers but you'd think wrong....
We also stopped in a town called Rollingstone at a town park for hydration. Did I mention it was hot? We also stopped in Lewiston for pie and ice cream. They had peach or strawberry/rhubarb. Since I have always thought that there is no better way to ruin a perfectly good rhubarb pie than to put strawberries in it, I had a great peach pie, alamode of course. We also stopped in Canton, MN but only because we were lost. With some help from a local man and his son we found out where we were and figured out a way to get back on the county twisties.

Decorah, Iowa was a special treat. Our new young Fossil, John, had an air conditioned empty house for us to stay in! It belongs to his parents who were gracious enough to allow us to spend two nights there. Some of the guys had a bed to sleep in, or an air mattress or similar. To no ones surprise, I pitched a tent in the side yard. Am I really that predictable?

As an added bonus, the city was celebrating their Nordic Fest this weekend. We were within walking distance of all the festivities which included many food booths and live music venues. We had pizza at the local pizza joint, then wondered around the festival. Home made Ligonberry Ice Cream was a special treat. Bible study that night was on marriage and the command to love our wives as Christ loved the church.
Posted by Fossil Apostles Motorcycle Gang at 8:15 PM