A beautiful morning in central Wisconsin.  What a great weekend to be on a motorcycle trip!    Bill needed to get home ASAP to babysit his kids so he and Jim woke up early and headed for the superslab at sunrise.  They'd be home in an hour and a half that way.  The rest of us (Wayne, Greg, Lloyd) moved more leisurely as we'd have all day to get home.  A scripture was read and a shared prayer with the two early risers.  The rest of us headed into the motel snack room to figure out the waffle maker; "You gotta flip the thing over, Wayne!"  We also examined and considered why there was vomit on the ground in front of Greg's bike.  The clerk mentioned a stray cat hanging out on his bike and we think that might have something to do with it. 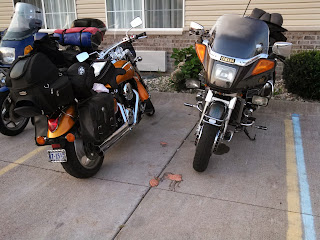 Yesterday at my friend's David's house he had mentioned that we needed to be sure and stop at the "High Ground Memorial Park" west of Neillsville on Hwy 10.  That seemed like a fine idea to us so after just a few miles, we found our first stop.  This is a sculpture park dedicated to the sacrifices of our military heroes.  We spent an hour plus walking around and it was worth every minute.  A great tribute it is. 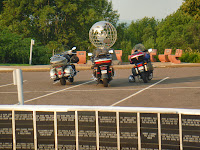 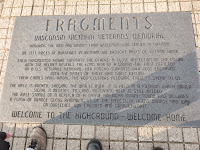 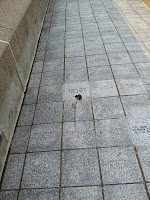 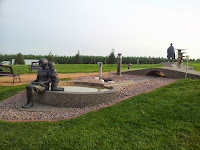 The rest of the morning we continued west on US Hwy 10 to home.  Hwy 10 across western Wisconsin is very scenic and highly recommended.

We had another great Fossil Trip.  The weather was close to ideal and the fellowship and riding was great.  Thanks to all who were able to come.
Grace and Peace through our Lord Jesus, the Christ!
Posted by Fossil Apostles Motorcycle Gang at 2:01 PM

Sunday, August 18.  We had a tight schedule this morning in that we needed to get to the Ludington Ferry by 8:00 AM.  Since the town was an hour away we awoke before dawn to load up and be on our way.  It was a cool yet pleasant morning and the sun was up by the time we were packed and on our way.  Nice morning for a ride.

We followed my GPS to the dock which sent us down some nice country roads, no arguments here!  As we pulled into the town of Ludington and headed towards our destination, Keith waved adieu and headed further south on US31.  Keith was heading to Chicago to visit his daughter living there.  They had tickets to a Sox game this afternoon.

The rest of us found the dock, checked in and queued up with a bunch of other bikes who had the same goal today:  get to Wisconsin without having to drive all the way around that big lake! 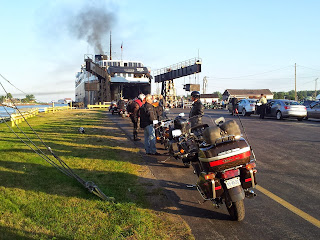 The SS Badger is a fairly old boat that was first commissioned in the 40's to haul freight trains across Lake Michigan.  It is a coal burner which doesn't make the EPA very happy.  They have been wanting to close it down as a polluter but fortunately for us they haven't been successful yet.  We eventually were allowed to ride into the belly of the ship, lashed the bikes down (bring your own ratchet straps) and headed up for breakfast.

It is a four hour ride across the big lake but since we cross a time line the clock only moves three hours.  It was cool on deck, warm in the dining rooms.  We unloaded at Manitowoc Wisconsin at noon.  A couple of Fossils needed to hightail it home yet this afternoon.  So now we waved goodbye to Steve and Rick who were taking the superslab all the way to Mpls.  The rest of us (five in number now) found our way out of town and headed west on US 10.

Our immediate goal this afternoon was to get over to Appleton WI to the home of a friend of mine, David.  David had been in a bad motorcycle accident in Wyoming this summer and had just got home from the hospital.  He said he'd be happy to get some company even from some old Fossil bikers so we pulled in front of his house about 2:30 after a stop of sustenance at a DQ we found on the way.  We had a nice visit and were able to tour his "man's garage" where he rehabs and sells old Honda Silverwings as a hobby.

The afternoon was getting warm to hot and we had a ways to travel before we sleep.  We continued west on US 10 and found a Super8 in central Wisconsin.  Before this I had found a no name motel just east of town which almost caused a five bike pile up when I slammed on the brakes and swerved into the parking lot.  They weren't expecting that, sorry guys.  Anyhow the motel and restaurant was closed on Sundays, though for some reason, unlocked.  That was strange....!

After checking in to the Super8 we found a local Pizza Hut and had a pleasant meal and conversation.  Back at the motel we continued our bible study on "A Good Servant of Jesus Christ".
Posted by Fossil Apostles Motorcycle Gang at 7:55 PM

Woke up to a nice Upper Peninsula morning.  Breakfast was in the same restaurant as the fish fry last night.  Breakfast Buffet for all.

After filling our bellies and a scripture reading, we headed out on Hwy 2, east towards the Mackinac Bridge.  Hwy 2 is very scenic this morning running along the north shore of Lake Michigan.   At our first gas stop Lloyd reported shifting problems related to the clutch.  We discovered that his hydraulic reservoir was low.  The cover stated DOT4 fluid was required but the gas station only had DOT3.  Volunteers stepped forward to run into the next larger town to find the requested fluid but a fellow biker assured us the DOT3 would work fine.  We went ahead and purchase the fluid and poured it in.  Seems to have worked with no dire consequences. While waiting for the repairs some of us got some education from a local man on smoking fish.  They had a very large smoker going at the station.  Fish in the structure were White and Salmon.

Our next stop was the bridge viewing park in St. Ignace.  This park is on the shore of Lake Michigan and provides an excellent view of the wonder which is the Mackinac Bridge: 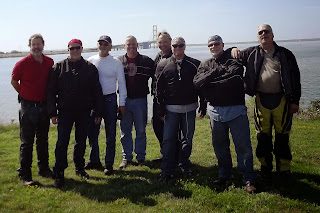 As we pulled into the parking lot of the park a couple in a Corvette pulled in behind us.  We began a conversation with them and they turned out to be a delightful couple who agreed to take a group picture of us.  They also waited for us to make our way out of the park and through the toll booth and took our picture while traveling over the bridge.  They then emailed those pictures to us.  You meet the nicest people on motorcycles (and in 'vettes)! 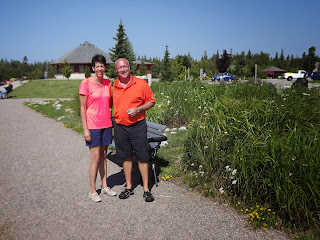 We crossed the huge bridge without incident inspite of the fact that road construction on the bridge pushed us all over to the metal grate portion of the bridge.  Grates and motorcycle tires don't mix very well.

After getting to the "mainland" of Michigan we headed to the west end and traveled along the east shore of the big lake.  While there we happened across a very nice road called State 119, a portion of which is co-named the "Tunnel of Trees Scenic Heritage Route".  Though it was a relatively busy and narrow highway it was very twisty and scenic.  Driving through the canopy of trees was very enjoyable and is the reason for it's name.

State 119 ended at a nice tourist town called Harbor Springs on the Traverse Bay.  This is where we found a restaurant for lunch.  There was a wedding later at the Methodist Church we parked in front of but the church secretary was relived that we'd be gone before the wedding started and thereby open up the parking for the guests.  She also told us which restaurant to go to.  BTW, all the conversation took place as she was hanging out of 2nd floor church window.  As mentioned, you meet the nicest people on a motorcycle.

The rest of the afternoon was spent getting around the bay, through the town of Traverse City, west and south to Onekama and to Lake Portage Bible Camp.  Traffic was heavy, the weather warm, and getting through the City was tough.  But sometimes you need to get to a destination and do what needs to be done.  We had a nice stop at a city park in Frankfort on the Lake.  Also a pleasant lookout along the highway at the Green Point Dunes.  We pulled into the town of Onekama fairly late and stopped for supper at a restaurant before heading over the Bible Camp.

After supper we found the Camp and Keith found our cabin.  He is good friends of the director who was very hospitable to allow us to crash in one of their dorms.  It was very nice accommodations and we were very grateful.  The bible study was continued into I Tim 6 on more points of "A Good Servant of Jesus Christ"  "Discipline yourself for Godliness". 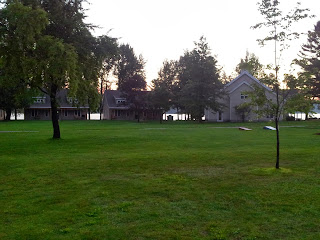 Day Three was another long one but very nice.