Our Annual Spring Ride came off without a hitch.  A good time was had by all.  We were 11 Fossils strong: Jeff, Bill, Steve, Greg, Rick, Lloyd, Keith, Matt, Wayne and new Fossils: Chao and Dave.  An eclectic bunch of bikes again as well.  The oldest was Dave's 1981 CX500 to Matt's 2011 VStrom.  Everything a Japanese brand except for my lone Kraut bike.  No token Harley's this time.  All bikes ran well though there was a concern at first with a leaky gas tank that turned out to just be a totally filled gas tank that didn't like being on it's side stand.

The northern guys meet at the Maple Grove Covenant Church at 8:00 AM and met the southern guys in Chaska at 9 (except for Jeff who's story is below).  Scripture reading was Psalm 113: "Praise the Lord... from the rising of the sun to it's setting the Name of the Lord is to be praised... Praise the Lord"!

We then headed south along the west side of the Minnesota River on Hwy 40 and 93.  The weather was perfect, not too cold, not to hot.  A bit overcast with a threat of rain but a good day for riding.  Shortly south of Chaska there was a guy on a hot bike and a high Viz green suit going the other way gesturing wildly.  I assumed he was warning us of a radar trap ahead or other problem so we slowed down a bit on increased  alert.  Turned out it was Jeff who had spent the night in Belle Plaine and was looking for us.  He turned around and caught us easily but I didn't know it.  I had been told previously that he would meet us in the town of Henderson so when we got there I pulled into a gas station and started searching up and down the street for a lone biker.  Greg walked up to me and said "are you looking for Jeff?"  "yep" "he already found us back on the highway".   So, we were now a full contingent and continued south.  Our goal was New Ulm and a meal.

South of Henderson the highway joins up with US169 just before St. Peter.  US169 is a four lane super slab, the kind of road that we normally try to avoid on motorcycle rides.  I thought I had a good plan to do that in that I found on Google Maps a nice twisty road that heads west just before the previously mentioned intersection.  Only trouble was that my chosen road was pure gravel.  Given the choice between a four lane and gravel we choose the four lane down to St. Peter. 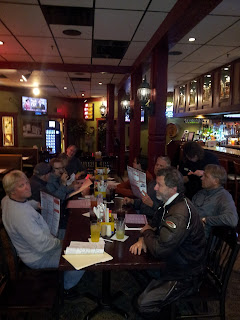 From St. Peter we headed west into farm country on County 5.  Google Maps had shown this road as a bit twisty around a couple of lakes.  Or so I thought, turned out the "lakes" were just duck sloughs. But it was a fine ride anyway and we found our way to New Ulm.  The restaurant chosen was to be called Otto's which we found OK but Otto sold out to a guy named Torge.  But they served us anyway and we had the place to ourselves.

After a filling meal and good conversation the plan was to head down town and see "Hermann the German".  This is a huge statue along the river of an ancient German war lord.  Most of the guys hadn't been to this town before so it was a must see in my book.  I had hoped to walk around the park and get some pictures of Hermann but it was starting to sprinkle so we just drove into the park, waved and headed out of Dodge, so to speak.  Didn't even get a picture of him!  The rain was coming in from the southwest and fortunately we were heading northeast and rode out of the wet quickly. 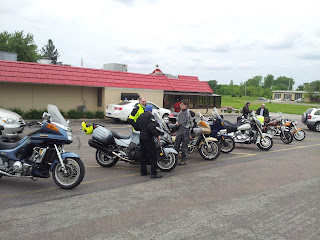 Now we were on US 14 and MN 111 and back to St Peter.  From St Peter we continued east on MN99. 99 turned out to be a fairly boring, straight road and I wished I had taken the more interesting looking county 23 back near St. Peter.  I'm sure that would have been a much better ride.  Oh well, maybe next time.  Anyhow we found our way up MN13 to New Praque for  the mandatory DQ stop.

After our soft serve delights we continued north to Jordan and after a stop at the motorcycle junk yard "Sport Wheels" we split up for our individual rides home.