Hey you Fossils.  Our summer trip is only one week out.  We leave on Thursday afternoon (26th).

Here is who is signed up to go:  Greg, Steve, Keith, Lloyd and myself.  If you know of someone else going, please let us know.

We are meeting on Thursday in the IKEA parking lot at 3:00 PM.  Our first night is at Trempealeau Wisc where there a nice state park or a motel near by.  Your choice, I'm camping unless it's raining.

The rest of the weekend is open to interpretation.  Anywhere we go down there will involve great roads.

Also, does anyone have a daily bible study to go through?  I can do another study out of First Timothy but don't want to hog the blessing since I did it last year.

See you on Thursday,

Saturday, June 7, 2014  (click on pics for full size)
Plan was to meet up at 8:00 AM and head south and east to Nelson, Wisconsin where the best "BBQ joint in SW Wisconsin" would feed us some great smoked pork.  Then twisty alphabet roads and the required DQ stop.  As is often the case, the plan did not happen.  What's it say in Proverbs?: "The mind of man plans his way, But the LORD directs his steps."

It was raining on Saturday morning and it was not suppose to stop until noon or later.  New plan: meet at noon and maybe head a different direction.  At noon it was still drizzling but the radar was promising that it should end soon.  We decided to go ahead and meet but to put the required DQ stop up front instead of later.  The DQ was nice and dry as we ordered our food and became acquainted with some new, young Fossils: Zach and Brandon.  We were 8 Fossils strong: Wayne, Lloyd, Greg, Steve, Rick S, Bill, and two previously mentioned. 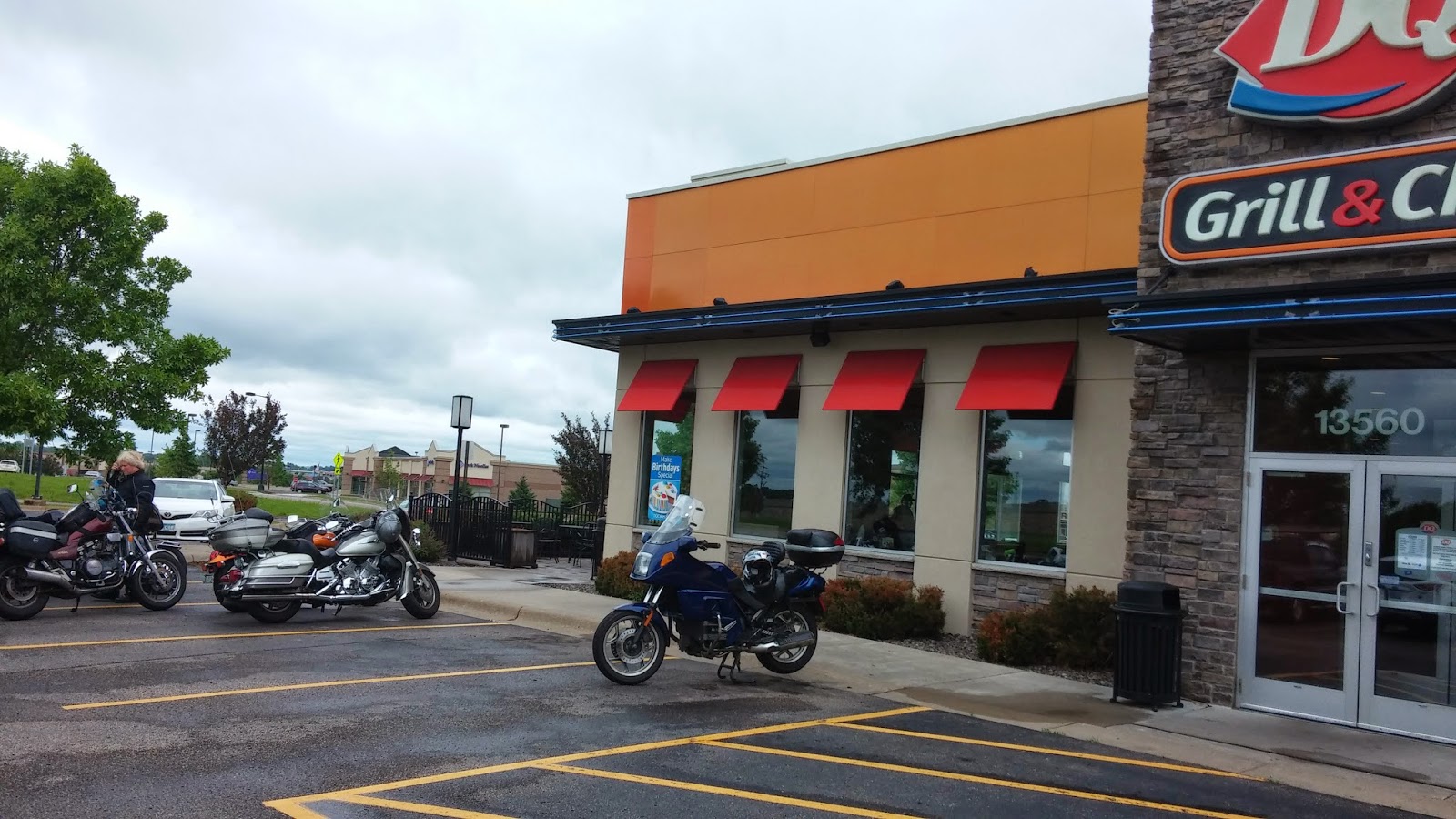 By the time we were out of the DQ the drizzle had ended and the roads were starting to dry.  It looked like this plan might work!  Our scripture reading today was I Chronicles 29: Yours, O Lord, is the greatness and the power and the glory and the victory and the majesty, indeed everything that is in the heavens and the earth; Yours is the dominion, O Lord, and You exalt Yourself as head over all.

We did abandon any hope of heading all the way to Wisconsin since it was still raining that way.  Instead we headed north to the Mississippi and followed the "Dayton road" along the south shore until the confluence of the Crow river, then turned left and followed it south on various county roads.

Bill lead us back across the river and we were hitting some more twisties when suddenly Bill and I found ourselves alone at a stop sign.  We pulled over to wait and no one was coming.  "Wonder what happened?" I said.  "Don't know, lets circle back and look for them" was the reply.  They were about a mile back, everyone had their kickstands down and were loitering around on the shoulder.  We pulled into an intersection and found out that Steve's right foot peg had dropped off and they had already given up the search.  The grass was deep in the ditch and half filled with water.  No chance of finding it.  Steve got creative with his highway peg, an allen wrench and some purple duct tape.  We were back on the road. 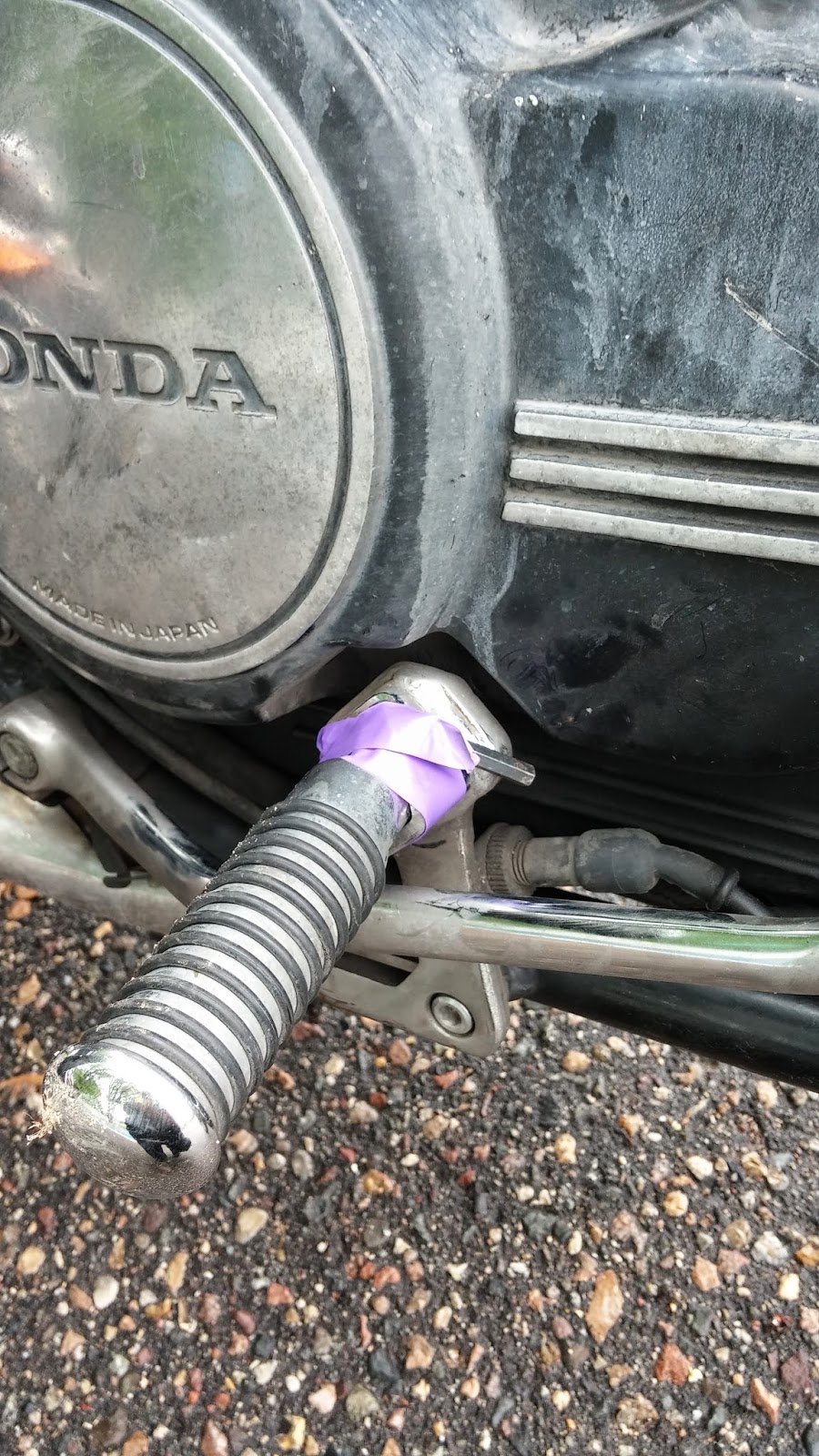 We continued south along the Crow and pulled into a city park in Delano, MN.  Steve checked his watch and realized if he hurried he could make it to a local bike junk yard before they closed where he could buy a new, used foot peg.  Goodbye Steve.   A couple of other guys also had some afternoon commitments so also had to split.  Before they left we took this picture.  (Lloyd is not pictured as he was behind the camera):

We had now whittled our numbers down to only five Fossils.  At the gas station I had a great idea of finding a restaurant that would have a piece of pie.  There we could sit and talk.  Lloyd found one on his GPS and only had to do about a dozen u-turns before we got there (I'm exaggerating).  We had the joint to ourselves and though they didn't have any pie their chocolate cheese cake was worth the trip.   We had a great time re-living the day and days of lore.  The clock on the wall said 6:30 and I suggested we go home.  After Bill about had a heart attack that it was so late we realized the clock was lying and it was really only 4:15.  Still it was a good time to head home so we paid up and headed back up the river valley. 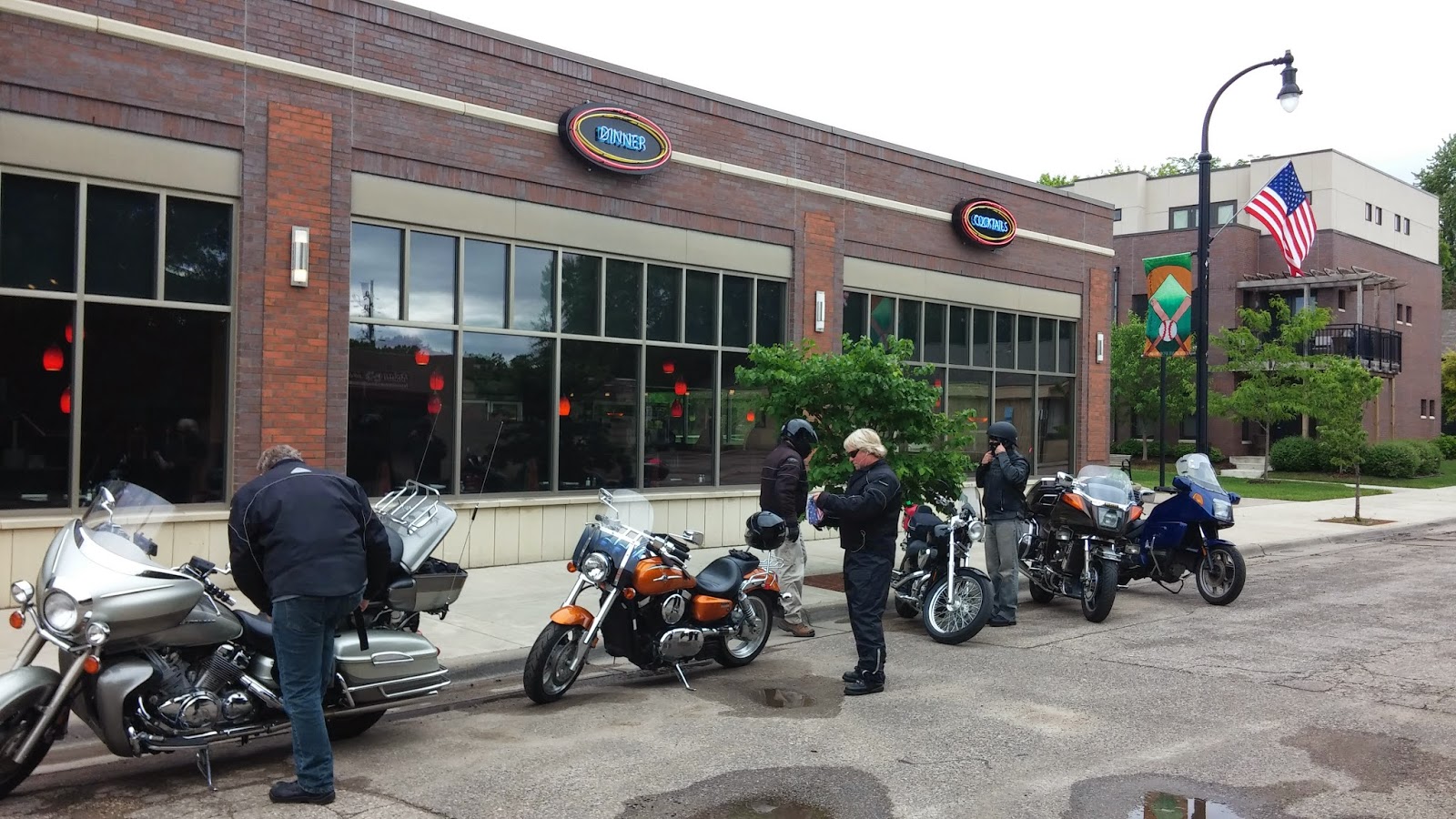 Another great Spring ride in spite of the weather not cooperating.

Thanks guys!
Posted by Fossil Apostles Motorcycle Gang at 8:46 PM