Breakfast and a Show


It's almost time for our annual winter breakfast meeting.  It will be Saturday morning, January 12, at 8:00 AM.  We will meet at the Perkins in Golden Valley at I394 and Louisiana Ave.

Afterwards, those who can will head downtown and go to the Motorcycle Show at the Convention Center.

Bring your calendar so we can plan our 2013 rides.


Hope to see you there.

Feel free to invite any who you think may be interested.

Please send me a reply if you are coming so I'll know how many tables to push together.

Our fall ride came about in spite of some threatening weather thanks to some creative, impromptu ride planning by Lloyd.   The story is that the weatherman was promising cold and rain for the day which was worrying us a bit, perhaps we might even have to cancel.  But as the day got closer it became apparent that the worst of the weather would go south and east of the Twin Cities.  Our original plan was to ride south along the Minnesota River to New Ulm.  With the threatening weather I (Wayne) sent an email out suggesting we ride north and west to get out of it.  Problem was, I am not familiar with the roads in that direction so perhaps someone who lives up there could put a quick ride plan together. Lloyd was gracious enough, (or perhaps guilted enough) to throw together a plan on some local twisty roads to the west.

So, Sat morning Oct 13 began cold and overcast as promised but it still looked as though the rain would stay  south and east.  We met at MGCC and there we were eight Fossils foolish enough to attempt to ride on such a cold, damp, mid October day in Minnesota.  There were myself, Lloyd, Keith, Bill, Greg, Matt, Rick and Randy.  All dressed like we were planning a snowmobile ride rather than a motorcycle ride. 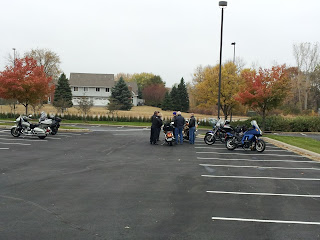 Our meeting place, huddled together for prayer, warmth and/or both.

After a scripture reading and some prayer we headed out following Lloyd along some nice twisty roads through the sub-divisions of NW Suburban Mpls working our way north and west.  At one point there was a little drizzle so those without waterproof pants stopped to add that layer.   Eventually we got out of the suburbs and through some confusion on Lloyd's GPS we went to Buffalo, MN twice.   The second time there, we stopped and talked about how hungry and cold we were, let's find a warm restaurant!   Supposedly the next town down Hwy 55 had a place to eat.  Unfortunately, the next town did not.  And we were still cold and now hungrier.   But, our GPS's all agreed that in Annandale, the next town west had a joint called the Homestyle Country Cafe.  Sounded just like our kind of place. 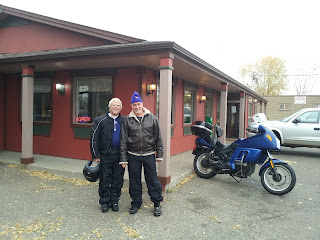 Bill and Keith out side the Homestyle Country Cafe.  (&Wayne's Beemer) 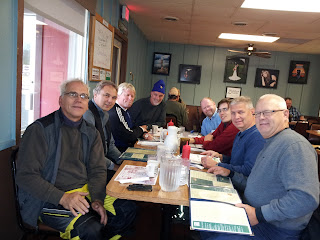 All of us getting warm and fed.

After a great meal and fellowship it was time to do some more exploring in the now slight drizzle.   More than a couple of people we met wondered about how we could be having any fun riding in weather like that.  But, we assured them we were having a great time and pressed on.   Now we were going to head down some county roads south and then start heading east back towards the Cities.  One nice road that my GPS showed as being appropriately twisty turned out to be closed due to construction.  This plus the fact that it was getting wetter and certainly not any warmer led us to abandon county roads and started east on US Hwy 12.  We took this to our required DQ stop in Delano, MN so the ride could be official.  (Required in that no Fossil ride can be considered complete unless there is at least one DQ stop). 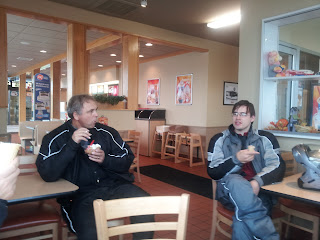 From there it was back north on county roads to Hwy 55 then on home.

Once again, it was a great opportunity to ride with some great friends.   We are all looking forward to getting the cold winter out of the way so we can start up again.   Thanks, guys!
Fossil Wayne.
Posted by Fossil Apostles Motorcycle Gang at 3:19 PM