Arrgh, all our pictures are gone!

Something has happened and all the images posted here for the past 8 years are gone. Apparently I need to start re-loading them all, one by one. Which will take a long time.

Please bear with me.

(BTW, I blame Google who now owns this blogger site and Picassa and the rest of the internet world and their incessant desire to tie their whole universe together.)
Posted by Fossil Apostles Motorcycle Gang at 5:20 AM

The forecast was for a nice Sunday afternoon so a couple of us decided to plan an impromptu ride to a DQ. We invited the rest of the Fossils and ended up with a total of six riders: Wayne, Greg, Lloyd, Jim, Steve and a new Fossil, Lloyd's young neighbor, Matt.

Fortunately the weather man told the truth this time and it truly was a beautiful Sunday afternoon. The plan was to meet at Greg's house in Brooklyn Center at 2:00 PM then we'd head west and south of the city until we found that allusive Dairy Queen. Some motorcycle gangs frequent bars, but we much prefer DQ's.

I (Wayne) was having troubles finding Greg's house due to problems with my GPS. The problem was that I had misplaced the back to the unit so was unable to mount it on the windshield where I could see the dumb thing. I was forced to put it in my jacket pocket where it was pretty much no use whatsoever. I got into Greg's neighborhood and then pulled it out of my pocket to see if I was going the right direction. I wasn't and couldn't figure out where I was suppose to be. After I was 30 minutes late I finally called Greg and got verbal directions to his house. That's what I should have done in the first place and I would have been saved from all kinds of frustration.

I final showed up and no one was mad at me, so that helped my stress level. Turned out that Steve was having similar problems but caused by road construction in his neighborhood. But we finally were all there and ready to go. So we mounted up and started off. This was Greg's neighborhood and his ride so he was our fearless leader today. He did an excellent job of getting us out of the city and on to some nice county roads eventually down along the Minnesota River Valley. 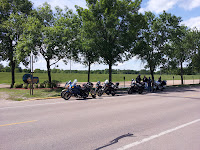 Our first stop was in Delano, MN where it was time to figure out which of about 6 DQ's would be today's destination. After much deliberation it was decided that the fateful choice would be the Dairy Queen in Belle Plaine. There looked to be some nice county roads down that way and we did enjoy them very much. We pulled into the river town at around 4PM and ordered up the ice cream goodies. My choice was what I always get, a Butterfinger Blizzard... why fool with success?

After finishing our tasty treats it was time to find our way home. We could jump on the superslab and go home quickly or enjoy ourselves some more. Steve told us of a great road heading along the river that we should take. The decision was easy; "show us the way, Steveo!" It was a very nice road (MN40) and apparently well known to the motorcycling community. The road was covered with bikers going both directions. And, as near as I could tell we were all smiling ear to ear! 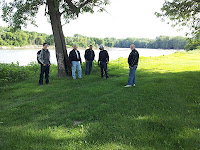 Hwy 40 ended up in a little river town called Carver. Steve's attempt to find a way through this town brought us to a city park along the river which became our final stopping point for this Fossil Ride, hence forth to be known as our "Sunday Afternoon DQ Run". After some more cheerful banter it was time to head home. I punched "Home" into my GPS and we headed north. Steve and myself who live on the south side split from the northwest Fossils in Chaska, except for Matt who didn't understand the frantic hand signals and horn honking and followed the southside Fossils across the river to US169. Fortunately, 169 heads north after Shakopee and hopefully Matt made it home after Steve and I headed east into Burnsville and onto our respective neighborhoods.

The Sunday Afternoon DQ Run was a great success. Thanks guys for coming, and especially thanks to Greg and Steve for finding such fun roads. And thanks to the Lord for the opportunity to ride one more time!
Posted by Fossil Apostles Motorcycle Gang at 9:14 PM