I had Friday off of work which meant a four day weekend with Memorial Day on Monday. Friday morning I took care of some household errands and started out early afternoon. Beautiful day but unusually hot for May in Minnesota. First stop was the Sportsman's Guide Warehouse Store in South Saint Paul for a deer mineral block for my favorite deer hunting spot. After securing my treasure in a saddle bag I got out of the city as quickly as possible and onto some county roads heading east and north. A couple of hours in I punched the Dairy Queen button that I have pre-programmed on my Nav5 and saw one in the next town: Somerset Wisc. (some bikers never pass a biker bar, I never pass a DQ without stopping) 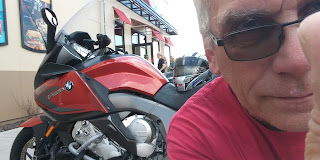 The good news is that I had all afternoon to make the normally three hour drive to my cabin. So, I stayed on all county roads heading north and east and stretched it to six hours. Anyone familiar with Wisconsin county roads will know why I prefer them and why I call them "alphabet roads". They all are named a letter of the alphabet, county road A, county road B,... etc. They are always paved and often full of curves. I love the alphabet roads!While enjoying my Blizzard I checked my weather app and noticed storms a brewing. Some had already passed my destination and some where coming in from the south and west. Since I was heading north and east, I figured I could miss them. And fortunately I was right. There was one black cloud that kept bird dogging me but I was able to keep in front of it which made me very happy.Speaking of happy, I also was very happy with my K1600GT. I was running smoothly, quickly and perfectly. On top of that, it's the most beautiful bike I've ever laid eyes on. 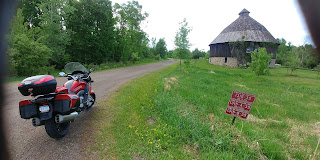 I stopped for a pulled pork sandwich in Birchwood WI (delicious) and made the last 20 miles to my shack just before dusk which is a requirement because at sunset there are always deer on the roads.Saturday morning was spent mowing and other work that is always there when you own a 2nd property. But in the afternoon my favorite (only) brother-in-law and I did a scenic route to Hayward where we found another Dairy Queen! I had promised him that I would let him set the pace because he is unable to ride long and fast due to a head injury a number of years ago which still bothers him but on the way back there was a long stretch of well paved road that was vacant of other drivers and proved to tempting to me. I passed him and twisted the throttle just to see what these six cylinders could do. My bro-in-law was a dot in my mirror in seconds as I hit 100 very quickly. Since I was about to a hill with unknown dangers beyond, I rolled back to 80 as I topped the hill. Wow, these six cylinders can move!!! 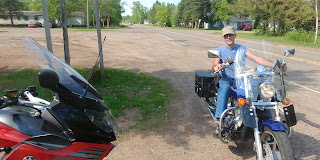 Sunday I attended the service at a local country church and then spent the afternoon and evening working on the bathroom of my cabin. A new ceiling of tongue and groove pine which I had salvaged from a house in the cities. (I am a remodeling contractor). 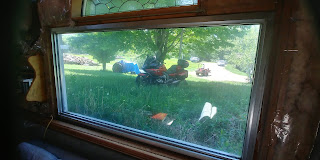 Monday, i packed up and stopped at a Memorial Day service at the cemetery. Afterwards I again had all afternoon to get home so headed south on those good old alphabet roads. When I'd stop at a town for gas/food/drink I literally had no idea what the town was. I was only interested in going either south or west because I knew that those directions were the direction of home. Mid afternoon I punched the Dairy Queen button again and was directed to one in New Richmond WI. Then it was due west on County Rd A and E until Stillwater MN, then back to the real world, four lane packed highway home. Even though I was traveling a Monday holiday where everyone is trying to get home from the long weekend most of the day I had the roads to myself until Minnesota. Nice, very nice. Of course, it did take me about six hours to get home, but that was just fine, .... actually more than fine, great! Traveling was very hot and actually got over 100 degrees F which was extremely unusual up here. Lots of years we never hit 100 and then only in August. Yes, I left those wind scoops open! 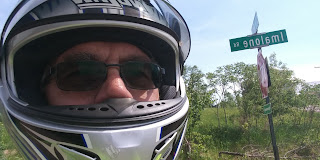 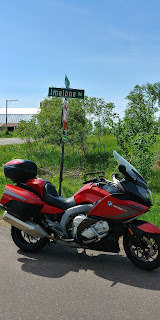 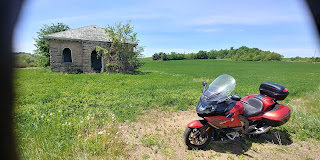